A Nigerian gay pastor (name withheld) from Aguata Local Government Area in Anambra State, was stripped naked by homophobes because of his sexual orientation.

Blackmail, extortion, jungle justice, and public disgrace and humiliation are some of the experiences of gay people in Nigeria. Even though these are all crimes, perpetrators often enjoy impunity and the innocent victim is ridiculed and their rights abused because some people believe that homosexuals deserve to be punished for who they are.

A pastor from Anambra state is now a victim of jungle justice in Anambra State, because of his sexual orientation.

Following the conversations in the video, it appeared that the pastor was outed by a member of his church.

A few seconds after, the group of men threw him a pack of condoms and asked what he uses it for, and he admitted that he uses it during sexual intercourse with men.

The ignorant homophobes who decided to take the law into their own hands showed the pastor no mercy. They kept slapping and abusing him and accused him of being a ritualist.

NoStringsNG cannot provide the full video as this will further humiliate the victim, and this is clearly against what we stand for.

However, we have provided screenshots from the video below with sensitive body parts covered. 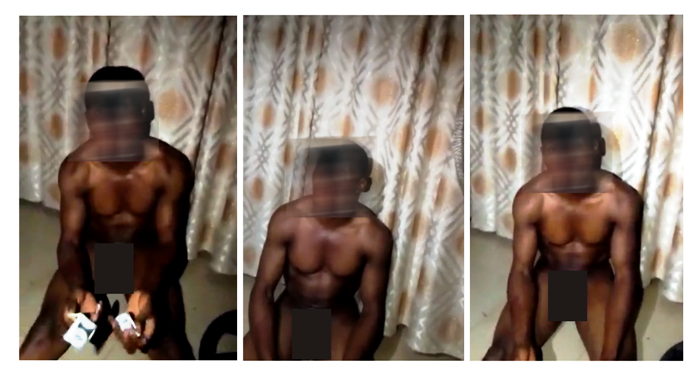