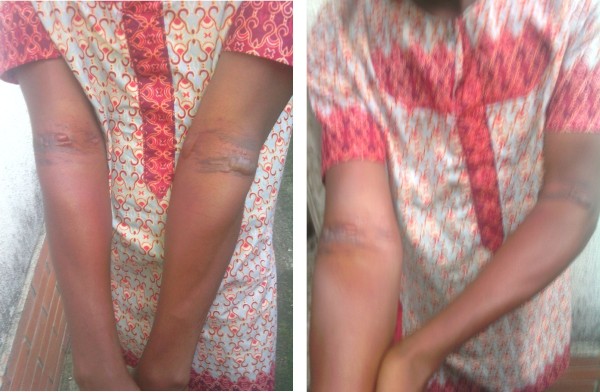 Kidnapping victim shows the marks on his arms where he was tied up. (Photos courtesy of NoStrings)

A Nigerian man was kidnapped this past weekend, blackmailed, accused of homosexuality and released after he paid a ransom.

The kidnapping happened around noon on Saturday, July 2, at No.2 Afam Road Oyigbo, Rivers State, Nigeria.

The victim, here called Prince, told NoStrings that he was picked up by his abductor after several chats with him on Facebook. NoStrings is an online enterprise that advocates on behalf of LGBTIQ Nigerians through information, news articles, podcasts, commentaries and more.

Prince said: “We connected on Facebook, he was acting all nice, and later invited me to visit him at Oyigbo, where he stays, but I refused.”

After several failed attempts by his abductor to get him over to his place, Prince said he suggested that they meet at artillery junction in Port Harcourt.

“He came driving a scrappy-looking car, and told me that I had nothing to fear. I was heading to the market at Oyigbo, so he told me that he could drop me at the market. I hopped into his car,” Prince said.

His abductor drove him straight to somewhere around Afam Road in Oyigbo. Upon their arrival, he was slapped and dragged out of the car into a building that was under construction, where other men tied him up and beat him, accused him homosexuality, and threatened him with prosecution under Nigeria’s anti-gay law. 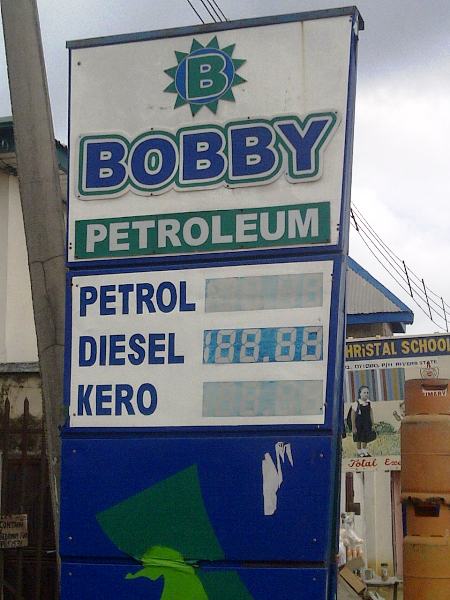 The abductors took his ATM card and used it to clear out his bank account, a total of about 286,000 naira (US $1,000), although Prince did not realize what was happening at the time. After beating him repeatedly, they told him to call someone to send them 50,000 naira (US $175) for his ransom.  In fear and frustration, he called a friend and asked him to withdraw 50,000 using the friend’s ATM card, but the the kidnappers then demanded that the ATM card be brought to them instead.

“They said that I should ask my friend to drop the ATM card somewhere at Location Road, Oyigbo, at a petrol station called Bobby Petroleum. They were holding sticks and metals. They said if the card did not arrive at the location, they would kill me,” Prince said.

After 24 hours in captivity, the victim was released at about noon on Sunday, July 3. He then went to block his stolen ATM card, upon which he discovered that everything in his bank account had been withdrawn. 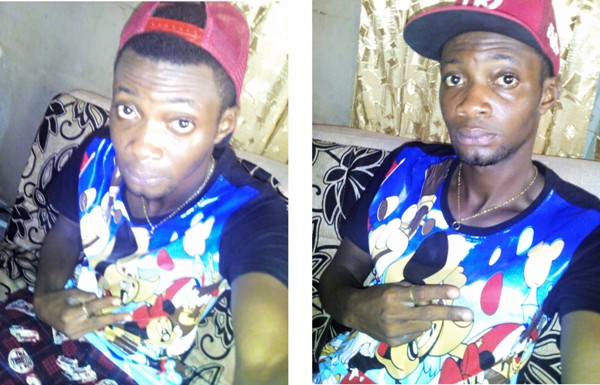 Hope Aguah, identified as one of the kidnappers. (Photos from Facebook)

Working with  NoStrings, Prince identified one of the kidnappers as Hope Aguah, who has a Facebook account under the name Almond Softkid.

NoStrings therefore warns people to be very careful, as the country’s anti-gay law is now being used by criminals to commit all sorts of crimes. That’s one of the results of hate laws: They criminalize people who are not criminals, while the real criminals remain at large.

We ask security agencies in Nigeria to investigate and arrest these criminals who take the law into their own hands.

Read Also: Suspected Homosexuals Beaten To A Pulp By Mob In Jos Nigeria

- May 6, 2020
TAGS BlackmailGAYHOMOSEXUALITYKidnappingLGBTNIGERIAOyigbo
NEWER POSTWhat does it mean to be a man in Nigeria?
OLDER POSTThese two Nigerian celebrities have redefined gender in Nigeria