In an all-too-common flare-up of ignorant homophobia, a video has gone viral on social media showing a young Nigerian man humiliated and stripped naked by an angry anti-gay mob. 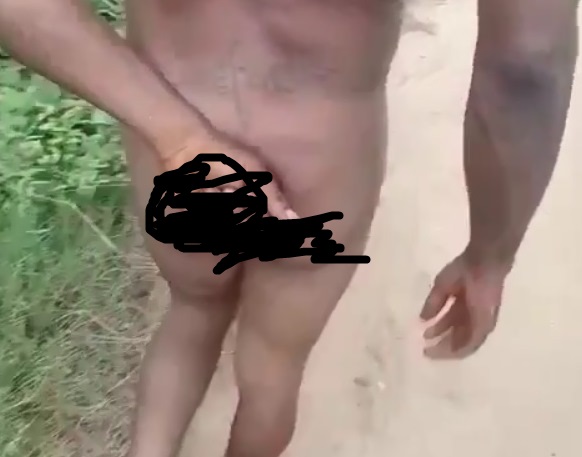 Image from the video that went viral on Nigerian social media.

In Nigeria, violent attacks on LGBTIQ+ people are on the rise, encouraged by widespread misconceptions about homosexuality and the continually negative portrayal of LGBTIQ+ people in the media.

In the latest video, the unidentified young man seems to have been set up by a contact who pretended to be gay, exiting the victim’s house just before the arrival of the mob, who speak Nigerian pidgin English.

Not much specific information can be obtained from the video, which follows the familiar pattern of LGBTIQ+ persons being lured and then exposed, humiliated, robbed, arrested or blackmailed.

Human rights advocates throughout Africa frequently warn LGBTIQ+ community members to be wary of going to any such  private rendezvous that is arranged online.

The first part of the video shows one of the perpetrators leaving the victim’s house naked, while the young man quickly tries to lock himself inside the house to evade the mob that was already shouting and demanding that he open the door.

The later parts of the videos show him being hung downward from a wall, then stripped naked and paraded down a road before he is allowed to get dressed again.

The video is a vile reminder to LGBTIQ+ people in homophobic nations that they need to take precautions and avoid getting into risky situations.

If you feel you need to watch the video, click the links below in order. (Viewer discretion is advised)