Homophobic writer encourages all Nigerians to hunt down homosexuals

Gafar Abdulmumin a Nigerian writer has demonstrated the highest level of homophobia urging all Nigerians to take laws into their hands by hunting and hurting homosexuals in the country. 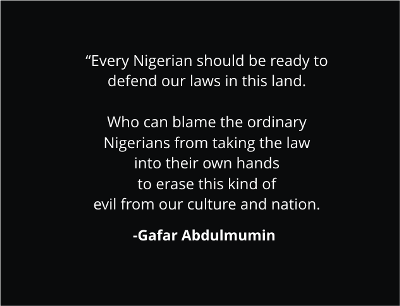 In an article written for Nigerian News Direct, the angry and bitter homophobic writer expressed very dangerous sentiments encouraging Nigerians to take laws into their hands by hunting for homosexuals because he thinks they are ‘evil’.

“Every Nigerian should be ready to defend our laws in this land……If not, who can blame the ordinary Nigerians from taking the law into their own hands to erase this kind of evil from our culture and nation.

In the article, Adulmumin expressed unwarranted fears and concerns over a book and blog articles written by a certain author whom he identified as Joseph Hopewell.

He claimed that the author insulted the Islamic religion, the senators, and promoted homosexuality in the country through his blog articles.

“In his book, he suggested that the Prophet Mohammed is a paedophile by marrying a seven- year old child. No wonder many believe him to be worthy of death.

Also, Adulmumin in his warped mind seems to be suggesting that homosexuals are the only carriers of HIV, and they are the reason why there is a widespread of the disease in Nigeria.

“Apparently Joseph Hopewell is unaware of the increasing scourge of HIV in our nation that is spreading like wildfire and killing millions.

He also called for the author’s arrest suggesting that the author too must be gay for ‘supporting’ homosexuals. He encouraged Nigerians to take laws into their hands by hunting down the author.

“He claims he himself is not a homosexual, but one has to doubt that claim. It is rumored that he is bi-sexual though he is believed to be married with children.

“He cannot be allowed to get away with it.

“He must be brought to book, we insist. If our lawmakers and courts do not take action, that can only send more signals to others to break our laws.

“If the lawmakers do nothing, sooner or later, the ordinary citizen will take the law into their own hands and who will blame them? He wrote.

It should be strongly noted that homosexuality is a valid sexual orientation. A person’s sexual orientation can never be altered; this has been proven with extensive advanced research and studies, which obviously proves that being gay is natural.

Shallow understanding on issues concerning homosexuality has led the leaders of many countries to criminalize homosexuality. This does not in any way validate the claim that being gay is evil or bad. Sexuality is very complex, which means that it differs from person to person.

Homosexuality is never new or imported as claimed by many. It has always been there, present in all race. Also, countless verifiable historical facts has proven this to be true.

Nowhere in the author’s writing did he make reference to a well researched study to prove his claims. This completely suggests that the writer is still very much wallowing in deep seeded ignorance which has prompted so much hate, and so therefore, is too blind to see the truth.

Also, there is absolutely no excuse that justifies anyone to take laws into their own hands. It is an offense and criminal to do so.