Dr. Alice Dreger a professor, historian, writer and author, says that it is impossible to change one’s sexual orientation. 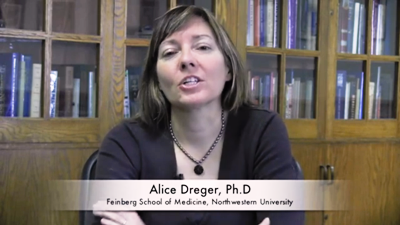 Dr. Dreger is a professor of clinical medical humanities and bioethics at Northwestern University’s Feinberg School of Medicine. She is a historian and author who has written for The New York Times, The Wall Street Journal, and The Washington Post. A fellowship recipient of the John Simon Guggenheim Memorial Foundation, Dreger is internationally recognized as an expert on sex anomalies, conjoined twinning, and contemporary scientific controversies.

Find interview and video below.

Do you think it is possible for people to change their sexual orientation?

The Religious Right likes to claim that it’s possible to change peoples’ sexual orientation and I think the data is very strongly against that. If it were true that you could change peoples’ sexual orientation, that would have started 150 years ago. I would say that as an historian. Certainly people tried starting 150 years ago, they started all sorts of stuff. They tried transplanting of healthy testes into gay men with the assumption that maybe that would cure them. They tried getting men to go to brothels to have sex with lots and lots of women in the hopes that that would cure them. They tried getting them to do vigorous exercise. They tried getting them to drink, not to drink. Many, many things have been tried and they don’t work.

What is your opinion of “ex-gay” programs?

The science as it stands today is quite strong. What you can do with people who are gay and lesbian, if they are highly motivated, is you can get them to stop having sex with other people of the same sex. You can probably even get them to say they no longer feel those desires. And you can certainly make them act in a way that looks more straight and appears straight to the culture. But the studies are pretty strong at this point in terms of showing you are not actually changing their sexual orientation. What you are doing is simply changing behavior.

What about those who claim to have “prayed away the gay?”

So, in science we talk about three different components to sexual orientation. And that is desires, behaviors, and identity.  So, if you want to send somebody into “ex-gay” therapy, you can certainly solidify them as having a straight identity, in terms of social identity. You can even convince them personally that they are straight. So, you can get them to have a self-identity of being straight. You can get them to behave straight. But, that doesn’t mean you can get rid of the desires. Which are what most of us actually think about when we are thinking about whether or not you are really gay or really straight. We are thinking about desires.

Can you address the idea put forth by “ex-gay” programs that say dysfunctional family dynamics cause homosexuality?

We know that historically speaking it was true in many families where the sons were gay that the mother was extremely protective and the father was distant from the son. And the assumption used to be that that was actually what caused the son to be gay. The data we now have and the interpretation we now have is that it’s quite the opposite. Which is that the fathers and the mothers were picking up on the fact that sons were gay, because often it’s the parent from early childhood that [knows] the child is probably going to be gay. And as a consequence the mother’s become very protective of the child because they understand that the child is going to be entering into a difficult social situation that’s going to abuse him. As a consequence, also, many of the fathers became distant because of the social norms that said that fathers are supposed to have straight sons, not gay sons. So, was it true that lots of families had, and some families still have, a situation where a gay son has a very protective mother and a very distant father? Yeah, that’s true. But it’s not that those things are causing a son to be gay. Because, frankly, if that were the case all the sons in the family would be gay . What’s going on is that the parents are reacting to the fact that they are picking up on that the child is probably going to grow up to be gay.

What about the argument made by anti-gay activists that there is no gay gene?

There is no gay gene, but there is also no gene for being straight. So, there is no single gene that causes anybody to feel any way sexually so far as we can tell. Sex development is super, super complicated and involves like a hundred steps and many genes coming together.  So, if we say there is no gay gene, I would say, yeah, that’s true, but there is no straight gene either.  Is it true that there might be genetic contributions to homosexuality? Absolutely.  Just as there are genetic contributions to heterosexuality. Might there also be other prenatal effects that can tilt somebody to be more likely to be gay or likely to be straight? Absolutely, that too. So, when we talk about people being born gay, we don’t always just mean genetics, we can also be talking about things that are happening prenatally in the womb. And the fraternal birth order effect as an example of that.

What advice would you give to a parent whose child just came out and they were thinking of taking that child to see a reparative therapist?

If a mother or father were thinking of taking a child into reparative therapy I would really want them to enter family counseling. Because I think what is going on is that there are tremendous social stressors going on in terms of the family causing them to feel in such a way that they have to change their child. I’d want to make sure that the parents really had informed consent so that they knew really clearly that the data shows that this isn’t going to work to make your child straight, but what it could do is increase the harm to that child, in terms of making them feel more depressed, potentially more suicidal. So, I’d want to make sure that there was true informed consent around that. And preferably I’d want to see the family go into a therapy situation where it’s family therapy where what we really work on is parental acceptance. Where we have a situation where the parents are not going in to change their child, but are rather going in to support their child.

What misconceptions do people have about gender and human sexuality?

So, what I often say to people is, if we think about for example how many soldiers at Gettysburg would have had one particular condition that is called hypospadias, where the urinary opening is not on the end of the penis, it’s underneath. When we think about how many of those men had that, well, there were a hundred and fifty thousand men at Gettysburg fighting. And the assumed rate of hypospadias is about 1 in 150 male live births. So, that would mean that 1,000 of the guys who fought at Gettysburg had that one particular kind of intersex condition. That’s just one kind, the most common type in males. But there are lots and lots of other ways that intersex can happen. So, it’s really much more common than we’ve all been led to believe.

Look into your crystal ball and tell me what you see on the horizon.

I think we are going to look more and more at the origins of sexual orientation. I’m hoping that we start looking at the origins of heterosexuality. That is to say, why do a lot of people feel straight urges. Because I think that we need to probalemitize being straight the way we problemetize being gay, and really start asking the question, “Why does a woman feel attraction to a man?” “What does that attraction look like?” “How does it operate?” Because we ask all of those questions about gay relationships but we don’t yet ask them very carefully about straight relationships. I think we are going to do a lot of interesting work in terms of where gay people do come from. And so a lot of the genetic studies that are ongoing are showing a lot of promise, in terms of pinning down some possibilities.

Polls show that those who believe that sexual orientation is a “choice” are more apt to be anti-gay. While those who believe it to be inborn are more likely to be pro-gay. However, there are many who say that in a free country it should not matter whether it is nature or nurture. What is your view?

Have something to say? Then leave your comments below.