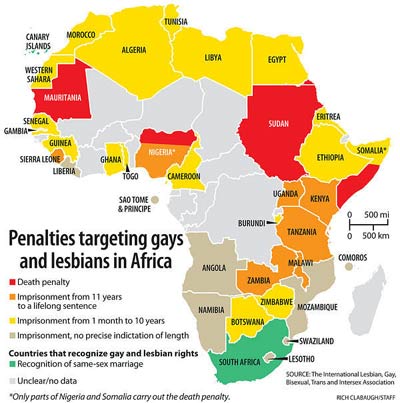 Our relationship with Western gender politics has been fraught with obstacles for as long as we can remember. In our modern Pentecostal churches, there have been claims that the Americans have fallen into “sodomy” and will be punished. There is a nation-wide skepticism of what we have considered to be “western” beliefs. They have become the scapegoat for all our fears of the changing landscape of gender and sexuality that we consume directly from the television.

It is not our lot to form our identities from a Western one, this is a bid to glean out our place within this rambling mess of change that we find ourselves, our identities caught up in. The successful other-ing of our LGBT community is definite everywhere, even in spaces not given by legislation. However, this fluidity has been sitting with our cultures for a long time.

There are many examples of how the terminology of our cultural languages has contributed to a fatal discrimination of the oppressed pervasive in our workplaces and homes. Using anthropological theory and histories has been long within the lexicon of LGBT activism in Nigeria.

Many have read/heard of the findings showing that sexuality and gender roles have been fluid in our continent for a very long time. Many who have read this are probably in denial of this truth. Some of the complexity of an African identity is really a patriarchal, Christian identity culled from missionaries with an older history and culture of fluidity of sexuality and gender reordered in non- Western communities around the world.

My own self-identification as a queer person came with exposure and immigration to the West. What was long suppressed and disregarded in my psyche as hormonal nonsense was final examined by myself for the truth that it was. What this does to the identity matrix existing in one’s head is incredibly startling. It was like a mirror shattering and the alienation was quick to the mark. It also drew out some racial tension within me. The majority of LGBT icons we perceive in mainstream media are white. Not seeing myself on the TV screen, realizing that myself identification was not “black” but was something that predominantly white people did was very tragic.

Furthermore, finding out that non-white people who were not heterosexual or were not cisgender were constantly slaughtered and/or imprisoned both at home and abroad was horrifying. That created an inner turmoil of racial, sexual and gender identity all in one.

What we are at odds with in particular, is the truth. Whether or not our identities are real or not, whether or not we have constructed a new narrative for ourselves? Is the pastor really right? Am I going to hell? Can I change? What am I doing? To be the alternative means a certain kind of anxiety and constant questioning within oneself. It is the cutting of the umbilical cord in a way that one has never imagined before.