Indian film teaches how to explain homosexuality to children and parents

For most parents, the question “Where do babies come from?” when asked by their child is a huge one to figure out – in terms of how should the answer be given. Would you explain science? Would you talk relationships? Love? Sex? 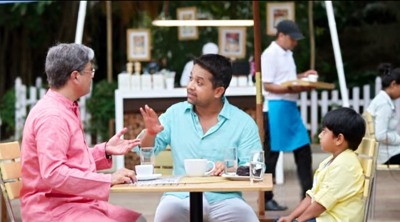 Sex. It’s one of the most controversial words that exist in our vocabulary. Shouted out loud or said in a whisper – seemingly minor decisions such as this can not only have significant implications, but also inadvertently slot a person in a particular school of thought and ideology. Now, add the concept of homosexuality to the mix, and the decibel of the whole discussion changes. Sex as a topic seems a lot more normal and acceptable, homosexuality on the other ‘Section 377 side’ of society, seems a lot more controversial, taboo… even blasphemous for some.

That is the sad reality of things. BUT, things are changing. We’re talking about what is homosexuality; about how it’s not a choice, but a way of being; about the need to accept that LGBTs are humans too, and there is nothing wrong with them! There are marches, talks, parades and debates to spread awareness, along with members from the art and film communities lending their voice in their own unique way… stressing on the need to understand the concept before being judgmental about it.

One such addition is the latest episode of a Web series by Y Films, Sex Chat with Pappu & Papa. The short film handles the seemingly complex topic of homosexuality in the most simplest way possible. The protagonist of the video is Anand, who is at the hospital with his family because his wife is in labour. While there, he meets his college friend Nikhil, who is at the hospital with his partner.

The video shows Nikhil in a conversation with Anand’s father.  His father engages in a small chat with him and goes on to ask him why he hasn’t married yet. The conversation only escalates from there. “Uncle” benevolently suggests Nikhil to come to Pune where he’ll show him “items” (we won’t even begin to cry foul on the sexist remark right now!). When he politely declines, Uncle – assuming he has finally figured out what his problem is – urges Nikhil to try the natural viagra-like herb Shilaajit. When Nikhil saw no respite any time soon from Uncle’s prodding, he very reluctantly tells him that he is a homosexual, expecting the stereotypical reaction. Uncle nods and smiles, but has absolutely no idea what that means. While Uncle gets stuck on the word “homo”, assuming that Uncle has understood, Nikhil agrees that yes, some people use that word too.

After Nikhil leaves, clueless Uncle proceeds to ask his grandson what the word “homo” means, who explains to him what/who are homo sapiens — leaving Uncle even confused, because now he wants to know what problem does Nikhil have in getting married, because after all, “we all are homo sapiens!” The task of untangling the series of misinterpretations falls on an unsuspecting Anand, who is seated with little Pappu on the one hand and Papa on the other, both puzzled about homosexuality.

What unfolds is one of the simplest explanations possible. Anand simply puts everything in the context of the ever-popular cricket for Pappu. He says that while most Jacks would like to play with Jill, there are times when Jack can play with Johnny too, or Jill can play with Ginny. Now, just transpose cricket with sexuality.

An alarmed Papa looks at Anand disapprovingly – how can it be that simple, his expression says. To which, his son’s prompt response is to take Papa back to his childhood days… when he was forced to write with his right hand even though he was a lefty, just because it was considered inauspicious. The father recounts how lovely his handwriting would be if only he were permitted to follow what came to him naturally and write with his left hand. Anand then interjects and says, that’s exactly how it is with trying to force homosexuals to become something they’re not or to tell them there’s something wrong with the way they are.

This article was taken from http://indianexpress.com/