One of Africa’s leading smartphone makers Infinix is now officially championing the fight against homosexuality in Nigeria. 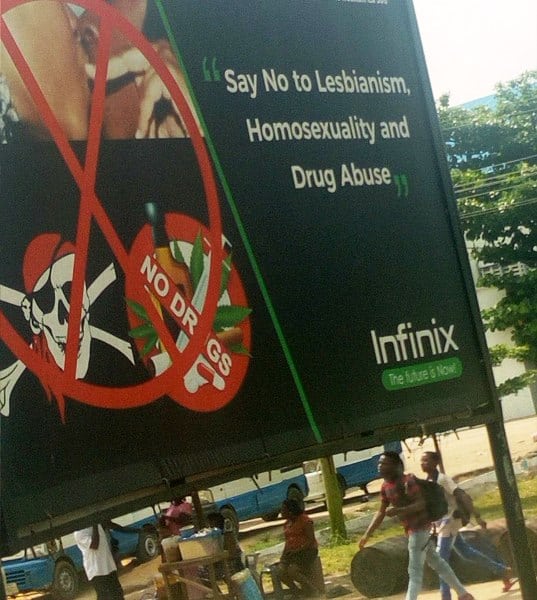 It has been reported that the Chinese phone manufacturing company has sponsored and endorsed several homophobic messages placed on billboards across school campuses in Nigeria.

Universities such as the University of Port Harcourt [UNIPORT] now has a large billboard near its campus with the homophobic slogan “Say No to Lesbianism, Homosexuality and Drug Abuse” sponsored by Infinix.

It was also reported that the Rivers State University of Science & Technology [RSUST] and University of Benin [UNIBEN] also has similar billboards all sponsored by Infinix as part of its anti-corruption campaign.

The messages suggest that homosexuality is bad and therefore something to be feared of which this is absolutely not true, as several concrete research studies have proven that homosexuality is normal, natural and a valid sexual orientation just like heterosexuality, but sadly, many still think differently due to ignorance.

In Nigeria, homosexuals constantly experience discrimination and violence based on their real or perceived sexual orientation and LGBT students have also reported cases of abuse while in school.

A research study carried out by a Nigerian researcher Kehinde Okanlawon, revealed that gay students in Nigerian universities experience discrimination and is sometimes even victimized by school authorities.

The Nigerian LGBT community, a community whose suffering is hinged on homophobia is outraged that an International cooperate brand such as Infinix will sponsor messages which are capable of further inciting violence toward Lesbian, Gay, Bisexual and Transgender [LGBT] persons in Nigeria who make up part of its customers.

For Infinix, this might just be an opportunity to advertise and promote their brand so as to maximize sales, but members of the LGBT community are like everyone else who just wants to live their lives in peace, and so therefore do not deserve anything less.