Controversial Nigerian Internet sensation Idris Okuneye better known as Bobrisky has over the years continued to shock people by redefining what gender means to many especially in Nigeria where many are still grappling with the idea of what it means to be lesbian, gay, bisexual, transgender, intersex and queer [LGBTIQ]. 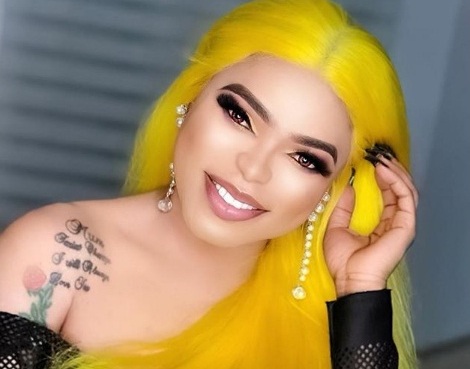 Bobrisky has remained a sensational topic for many, especially when the issue of homosexuality is raised. But interestingly, even though hated by so many, she has been able to win over a lot of people, even her so called ‘haters’ who sort of seem obsessed with her personality, is gradually aligning with her ideals which has resulted in her ever growing fan base with millions of followers on Instagram.

It is unarguably true that Bobrisky is very smart and knows her onion really well especially when it comes to social media frenzy as even though she is always appearing in the media, there’s still more undisclosed and yet to be unraveled about her mysterious nature.

Also, Bobrisky’s feminine nature and frequent talks about having a mysterious male lover which she has often referred to as ‘bae’ has led many to conclude that Bobrisky is gay, an accusation that she has denied so many times in the media.

But even with all this, many seem to think that Bobrisky is just making things up to stay relevant in the media. In fact a certain popular Instagram influencer recently claimed that Bobrisky is using her ‘antics’ to deceive women just to get under their pants. Hilarious right? Well let’s find out why Bobrisky is clearly not gay.

READ ALSO: Does Sex With Another Man Make You Gay?

Also, sex and gender are two different things. A person can be assigned male at birth (sex) but doesn’t identify as one. Bobby was assigned male at birth but now does not only identify as a woman (gender) but lives her life as a woman. She has also come out openly to tell the public that she is a woman and so wishes to be seen and addressed as such.

As addressed above, dressing up occasionally to portray a different gender doesn’t make one gay or transgender. Men who dress as the opposite sex are referred to as transvestite, and anyone who does this is generally considered a cross-dresser. Yes Bobby might have in the past claimed to have indulged in the practice to promote her cosmetic products, but has now come to clarify things that she isn’t a cross-dresser but a transwoman and so wishes to be seen and respected as such. This is not negotiable.

People should stop seeing/addressing transwomen as gay. Their gender does not define their sexual orientation. Transwomen are women who were assigned male at birth. Bobrisky is a woman, and to the very best of what we know, she has never said that she is sexually, emotionally and romantically attracted to other women and so therefore cannot be labeled gay.

This might be somewhat hard for many to take in, but just because a person hasn’t undergone a Sex- Re-assignment surgery (SRS) doesn’t mean that they cannot be respected as the gender that they identify with.

We need to know that gender is a social construct while sex i.e. male, female or intersex is biological.

Most people need time to fully discover who they truly are, and same applies here to Bobrisky who after some time has recently come out to the public to declare her true gender, but not her sexual orientation.

So given all this, it will be completely foolish for anyone to still think that Bobrisky is gay.

Nollywood gay film starts well, even sex scenes, but then…