It is no longer news that the human rights of LGBTIQ+ Nigerians are being violated on a daily basis with LGBTIQ+-phobia on the rise.

However, over the years, queer-identifying people especially in Africa have remained largely misunderstood and viewed as taboo, but the good news now is that much of that is changing, especially with increased visibility and consistent advocacy. 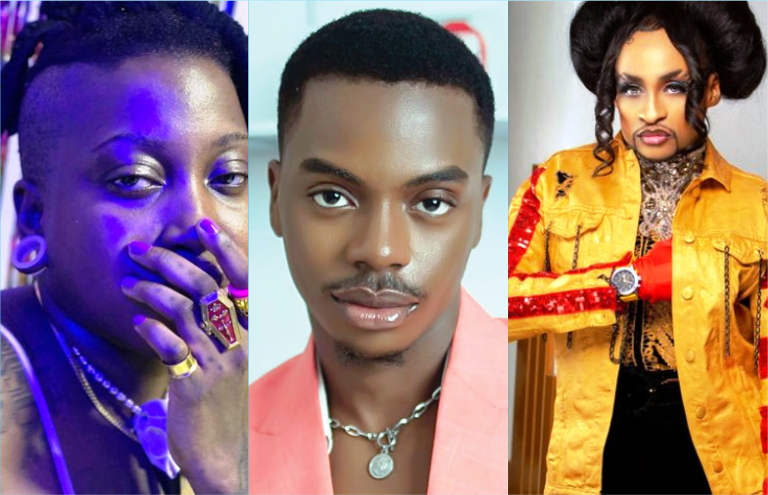 Also, quite recently, we are beginning to witness a wave of popular Nigerian celebrities demystifying the myths around gender identity and expressions through their art forms, brand, and style.

Now whether or not these celebrities themselves identify as queer is not the concern here, but we cannot ignore the obvious fact that their nontraditional sense of style, expressions, and conscious efforts to stay true to their authenticity has indeed inspired a new generation of daring LGBTIQ+ people.

So the big question now is: who are these celebrities and how are they making that happen?

See below a rundown of some of those celebrities.

Denrele Edun is a Nigerian media personality and entertainer.

Denrele has been a unique personality in the Nigerian entertainment industry, and his style and authenticity are like no other.

However, the question of how Denrele Edun is striving to attain equal rights and societal status for queer people in Nigeria comes into play. The Fashion icon has been very authentic with his fashion style and how he carries himself, which has been a source of inspiration to many queer Nigerians.

Denrele Edun has been appearing the way he wants to and has been widely celebrated for his unique personality, another reason why many LGBTIQ+ people identify with him and also see him as a role model.

Many will argue and wonder why Bobrisky is on this list, however, we cannot deny the fact that the cross-dresser has inspired many from within the LGBTIQ+ community, especially trans women.

The cross-dresser has been a source of inspiration for many queer people who do not want to conform to the conservative Nigerian standard. Bobrisky has been very vocal about being true to themselves and has no regard whatsoever for naysayers.

Having seen how Bobrisky is well accepted and celebrated for who they are, many queer Nigerians are in doubt truly inspired by Bobrisky’s resilience.

Temmie Ovwasa is a Nigerian singer who made it to prominence in 2015 after they were signed to YBNL and got the name “YBNL Princess” until their departure from the label in 2020.

Temmie identifies as non-binary. They are the first Nigerian singer to release an openly gay album in Nigeria.

The singer has always been vocal about their sexuality and has always agitated for the equal rights of queer people in Nigeria.

Aside from being open about their sexual orientation, they are living authentically and using their music to expose the negative impact of LGBTIQ+-phobia. No wonder they are loved by many from within the LGBTIQ+ community who see them as an inspiration.

Enioluwa Adeoluwa is a social media sensation and influencer widely known as the “lip gloss boy” or “beauty boy.”

Enioluwa is also known for his exceptional use of make-up and has won the hearts of many people, especially femme men who are constantly motivated and inspired by most of his content.

Also, during Enioluwa’s interview with PaperMag, he talked about his advocacy and representation of femme men in Nigerian society.

He said, “I’ll be living in denial if I say I’m not femme. I am, and I’m proud of myself. I live on my femme side because she’s pretty, she’s smart, she’s intelligent, she’s powerful and nobody can talk to her. Again, representation is so important. When people saw femme boys in the country, they saw trouble. But femme boys have created such a huge platform that they are breaking doors for other people that look like them. I came in through that door and people knew me to be that boy on Instagram who uses makeup, but then that boy is also successful in school and this is something Nigerian parents like.”