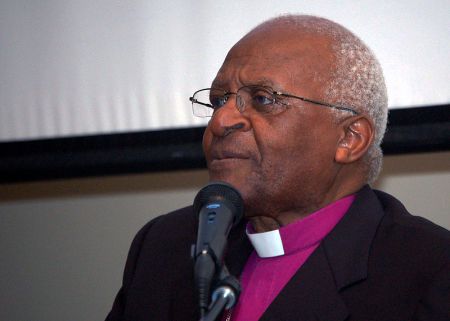 Archbishop Desmond Tutu, who formerly led the Anglican Church of Southern Africa, has long been a supporter of LGBTI rights. (Photo via WikiCommons Media)

I seriously wish that the Anglican church in Nigeria, will put aside it’s hypocrisy, intolerance, and the hate they preach and promote – look to this advancement and gesture of acceptance, and see the need to embrace true diversity and take into recognition and display a deeper level of wisdom by recognizing and extending a warm spirit of love and compassion for it’s already bruised members who are already struggling with their sexual orientation and who seek to be free from the bubble that the church has placed them in, and who long for respect, dignity, liberation, and desires not to be discriminated against on the basis of their sexual orientation.

The church fails to clearly understand that the real evil is ‘Hate and discrimination’ and that, this brings on disunity and discourages and deprives people from living their authentic lives. and without living an authentic life people fail to live up to their full potentials, and as result become less productive and can only contribute very little to the church and the society, and in turn leading to a very dysfunctional, frustrating and unfulfilling life for many at the very end. This is the truth that they have refused to embrace.

JOHANNESBURG – Anglican bishops from across southern Africa have resolved that gay and lesbian partners who enter same-sex civil unions under South African law should be welcomed into congregations as full members of the church.

This is according to a letter issued by Archbishop Thabo Makgoba of Cape Town on Monday. The letter stated that a document outlining guidelines on members living in same-sex unions would be sent to the church’s Provincial Synod, its ruling body, which meets later this year.

In the statement, Makgoba says;

“I believe that its adoption by Provincial Synod would be an important first step in signalling to the LGBT community that we in the Anglican Church of Southern Africa, through our top deliberative and legislative body, see them as welcome members of our body as sisters and brothers in Christ.”

“We are of one mind that gay, lesbian and trans-gendered members of our church share in full membership as baptized members of the Body of Christ…”

Some practical implications of the guidelines are that congregations would not be able to baptize children of same-sex couples, while also not allowing stigmatizing of the parents.

These new guidelines however, do not extend to that of marrying same-sex couples or allowing its clergy to enter them.

Are gay folks trying so hard to win the tolerance of heterosexual folks?