Ray Isaac an Australian pop music sensation spoke to NoStrings about his new emotional and captivating music video which he dedicated to the victims of the June 12 Orlando shooting that took away the lives of 49 people, and left 53 others wounded. 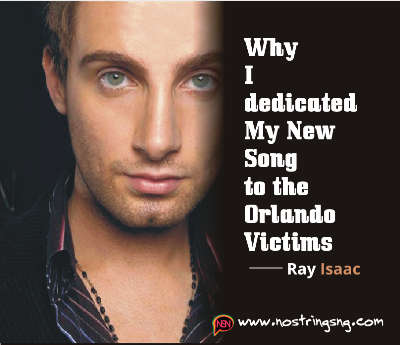 The song and video which is titled ‘We Stand United’ features fly Young Red and the Sydney Gay and Lesbian choir.

In a new podcast with Mike Daemon of NoStrings, Ray said that he was inspired to support the LGBT community because he himself struggled a lot with depression in his early days, and so hopes that his music will heal the heart of many, who may be going through similar experiences.

Ray who doesn’t exclusively identify as an LGBT artiste, said that gaining mainstream media attention has been a bit difficult. He said “Sometimes I wonder, is my music too LGBT, and is that the reason why it [the mainstream attention] hasn’t happened?”

Ray sympathizes with the pain of LGBTI persons in Africa who are suffering from hate laws and discrimination. He said “With all my heart, I say am so so sorry, I just wish it wasn’t like that in Africa or anywhere else around the world”

Ray is who is an independent Pop Singer-Songwriter-DJ has co-written and released chart topping songs with Bob Sinclar, Robbie Rivera, Chris Willis and more.

Ray’s music has also been featured in notable television shows and films, including the CW channel and many others.

Some of Ray’s songs about anti-bullying have been used for Equality campaigns from around the globe.

Watch Ray’s new music video for “We Stand United Below”