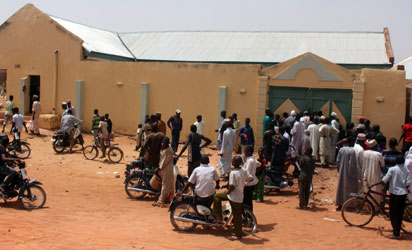 Police in Sokoto over the weekend, is said to have stormed a venue, where they claim two men hosted hosted a gay wedding.

As reported on Linda Ikeji’s notorious gossip blog, the police in Sokoto, is said to have acted based on a tip-off, ignoring what the constitution says about a person’s right to privacy, right to freedom of association and peaceful assembly, stormed the place, but unfortunately for them, they met no one at the venue, and instead, arrested the innocent owner of the building.

It is a shame that people will ignore the more pressing issues in the country, a country with serious electricity issues, bad roads, no jobs, high level of corruption, terrorism, deteriorating economy and with it’s leaders looting and squandering the country’s resources.

It is also baffling that amidst all these, the Nigerian police, whose duty is to protect lives and properties, are not only wasting their precious time, energy and scarce resources, but also breaking the law, going on a wild goose chase to harass and disturb the peaceful assembly of consenting adults in their own private spaces, all for no just cause.

And also when something like this happens, the media is always quick to label it ‘Marriage or wedding’. Any functional media should be careful with their choice of terms, if they really want to be objective with their reportage. We all know what makes a marriage valid, so if the said incidence actually did happen, then what went on there, wasn’t a ‘marriage ceremony’, but rather, it was just an event, and the police did not need to worry.

But how about what the constitution says about a person’s fundamental human rights, especially, as it concerns the right to privacy and freedom of association and peaceful assembly?

We need to stop fooling around, and start looking into what our priorities are as a Nation, that is if we really want to clean up the mess that we have created for ourselves. Lets deal with the weighty matters, as homosexuality has never been a problem.

Have something to say? Add comments below.