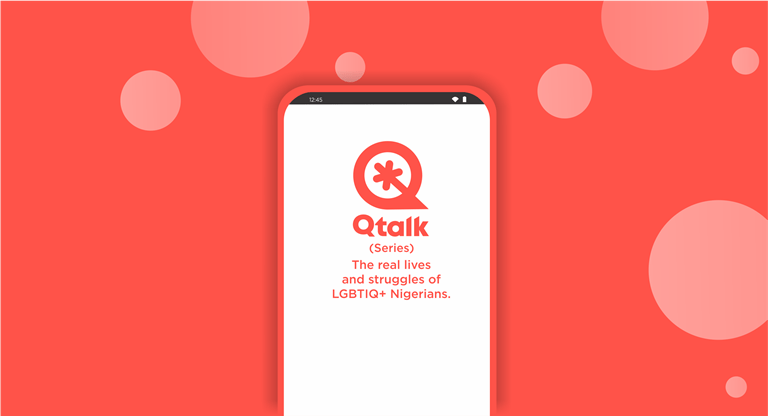 Qtalk users’ names have been changed in the following writeups, contributed by the counselors who provide advice via the Qtalk app:

Chinyere, a 32-year-old single mother of a gay teenager, reached out seeking help on how to get her son to open up to her about his sexual orientation. She is worried about his safety because many people mistreat gay people in Nigeria.

“Please help me. I found your app whilst searching Google for help on how to deal with a gay child. My son is gay, I know because I have heard him talk romantically with a boy that visits him at home frequently. They are friends from school. I love him so much but I am worried about his safety as I am scared that people might find out and hurt him. I also want him to open up to me about his feelings as I see that he is most times depressed and seems not to have a lot of friends,” she wrote.

The counselor commended Chinyere for not being homophobic and for wanting to learn more about her son’s sexuality. She was reminded that coming out is mostly a difficult thing for LGBTIQ+ people. She was advised to gain her son’s trust and then gradually introduce the subject in her conversation with him. The counselor shared links to online resources where she could learn how to engage her son in conversations about his sexual orientation.

A Nigerian gay teenager narrated an experience of how he was raped by this cousin during a family visit a few months ago. The 17-year-old said that, since the incident, things did not return to normal for him.

“I couldn’t stop thinking about the whole experience. Sometimes I think that it is my fault. I have blamed myself ever since then. I hate myself so much that I think about killing myself. I just need to stop feeling this way,” the youth stated.

The teenager received counseling that went on for weeks. The counselor helped him to understand that it wasn’t his fault that things turned out the way it did. He was also referred to a health facility to get tested for STI/STDs. He was also linked to a secret Whatsapp group where he has been sharing his experiences with others who have survived similar traumas.

David, a 26-year-old gay man based in Owerri, said he was attacked by boys in the area who suspected he was gay. They took his wallet, phone, and then injured him. He managed to find his way to the hospital but was later arrested by the police shortly after he was discharged. Apparently someone had reported him.

“It was all a shock to me that fateful day. I was arrested by the police who took 30,000 naira (about U.S. $77) from me for bail. I have not done anything wrong to deserve the wicked treatment. I want justice,” David wrote.

After learning of David’s experience via Qtalk, the counselor, who is a legal practitioner, told of possible options for getting justice for what happened to him. David was also linked to a human rights organization in Imo State where the case has been documented. Further action is pending.

Bola, who lives in Abuja, said he has been having a hard time with his family since his parents learned about his sexual orientation through their pastor.

“I have battled with internalized homophobia for years. I grew up in a strong Christian family and somehow I believed that homosexuality is sin. At some point last month, I decided to confide in our pastor. I told him about my homosexual feelings and he promised to pray for me and shared some Bible verses with me. But I was surprised that he later told my parents. Since then, I have not been allowed to go out, and my father is threatening to disown me,” Bola wrote.

The counselor made Bola understand that homosexuality is not unnatural and is, therefore, nothing to be ashamed of. He acknowledged that Bola’s feelings were understandable, resulting from internalizing years of negative stereotypes and myths about homosexuality. The counselor gave him Comprehensive Sexuality Education information and links to online resources that helped Bola understand what he was going through.

Abel is having a hard time coming to terms with the reality that a relationship that he had nurtured with Carl for three years was over.

“It has been hard for me these past few months. I can’t believe that the man that I love so much ended things with me and now wants to settle with a woman. I feel used and completely frustrated,” Abel wrote.

During the session, Abel acknowledged that he and Carl had no plans when the relationship started, and also he knew Carl was bisexual.

After a deeper conversation, the counselor let him know that their relationship seemed to have started off blindly. They never had heartfelt conversations about possible future expectations. In the end, Abel understood the mistakes that were made. The counselor shared some healthy emotion-coping skills with Abel, which turned out to be very useful to him.