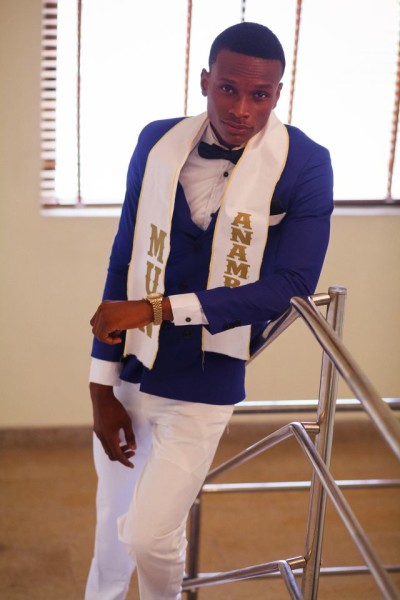 Francis Egwuatu, the 2014 winner of Mr Universe Nigeria, in a bid to defend his obvious insecurities, claimed that he is not a homosexual and expressed his hatred and disapproval of homosexuality.

In a recent interview with The Nation , the Mr. Universe 2015 winner said that he is not comfortable with when people label him as gay. He said:

“I am not gay, and it is very annoying when people make such comments. There was this girl that added me on twitter. She was like; ‘Tell me the truth, are you gay?’ It was so annoying. Some people think that for you to win the pageant you must be gay and men must sleep with you and all, but that’s not true. I just wish I could do a story and the heading will just be ‘I am not gay’. People have concluded in their mind that we are gays. Even when I was profiled on Linda Ikeji’s blog, there were comments like, gay alert; the guy is gay and all that. People feel if you are a male pageant contestant, the only hard work you need to do is to sleep in the room. That’s a negative thought, but I believe a person with a positive thought won’t think like that. For me, you just have to be positive; you just have to believe in yourself. I have gone for pageants that I lost (Mr. Tourism Nigeria), but that didn’t stop me from going for more”

The Mr. Universe winner also claimed that God does not approve of homosexuals and so therefore the ‘act’ is wrong. He said:

READ ALSO:
Will I Go To Hell For Being Gay?

The Truth About Homosexuality And Christianity – With Dr. Stephen Lovatt

We do not entirely blame Mr. Francis for nurturing these kinds of thoughts about homosexuals, as a lack of understanding and ignorance, coupled with the stereotyping and frustration emanating from the way society perceives homosexuality, is a contributing factor which has led to his very expressions.

But Mr. Francis, should know that gay people are human beings with feelings, even though his comments will not change them, it will sure trigger regrets and hurt. It is indeed dangerous for one to go on with the way he did with his homophobic comments.

We here at NoStrings are ashamed and deeply shocked that somebody of his kind who should at least by now be informed about sensitive subjects like these and with the exposure that he is supposed to have gotten, will come in the open to talk the way he did about homosexuals.

Mr. Universe, please know that the issue of sexuality is not all black and white. There is more to it, so we here at NoStrings call you to order and advice that you dig deep about these matters, especially as many are now looking up to you as a role model, else you speak things that will shut doors for you, especially as you need doors open for you at this early stage in your modeling career. You just do not know who you might run into for opportunities, homosexuals are humans, and they are everywhere.

Also know that your comments if not carefully chosen, especially as it concerns sensitive subjects like these, will incite hate, promote discrimination, and could lead to loss of lives. We are sure you do not need the blood of anyone on your hands. Also, there is a word called ‘diversity’ we advice you check it up, and do a proper research on gender and sexuality.

Want To Say Something? Leave Your Comments Below.