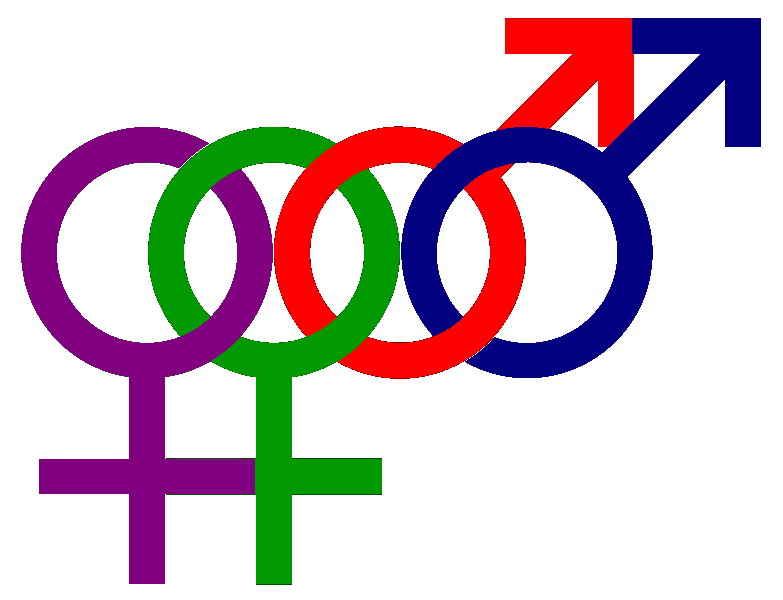 There are seven myths about sexual orientation that may contribute to your confusion, so let’s examine them one by one.

Myth #1:  A person is either straight or gay.

Our culture likes to categorize people, and the categories it provides often do a poor job of capturing the diversity of the human experience.  For example, we are sometimes asked to check a single box to indicate our ethnic identity, but this is an increasingly difficult task as multiethnic identities become increasingly common.

Myth #2:  Everyone who claims to be bisexual is in denial about being gay.

Second, some lesbians and gay men went through a “transition period” of thinking that they were bisexual because it was a less dramatic shift in sexual orientation identity than going from a straight identity to a gay identity.  Consequently, some of these folks may view other people through the lens of their own experience.

So, although it is true that some people who claim to be bisexual are not yet ready to acknowledge that they are gay or lesbian, it is certainly not true that everyone who claims to be bisexual is in denial about being gay.  Bisexuality really exists.

Myth #3:  A bisexual person is equally attracted to both men and women.

Although some bisexuals experience equal or nearly equal emotional and physical attractions for both males and females, this is usually not the case.  As researchers reported in their book Dual Attraction, there are at least three other “types” of bisexuals.

Myth #4:  A person’s emotional and physical attractions should be congruent.

Emotional and physical attractions are congruent for many people, but not for everyone.  (By “congruent,” I mean that emotional and physical attractions are both directed toward men, or toward women, or toward both.)  In her book Sexual Fluidity, Dr. Lisa Diamond notes that romantic love and sexual desire are fundamentally distinct experiences that evolved for different reasons.  Sexual desire evolved to promote survival of the species through procreation.  Romantic love evolved from the bond between infants and their parents, thus increasing the infants’ chances of survival.  Thus, there is no biological requirement that romantic love and sexual desire be congruent.

Myth #5:  Gender is the basis of everyone’s sexual orientation.

The concept of sexual orientation presumes that gender plays a fundamental role in directing our desires.  Thus, one might ask, “Am I attracted to men, women, or both?”  When people imagine the qualities they seek in a desirable partner, those qualities may include gender-based physical traits (e.g., a muscular chest, voluptuous breasts).  It is also likely that those desirable qualities include gender-neutral traits (e.g., a sense of humor, self-confidence, kindness, dependability, playfulness, passion).

When most people find another person to be desirable, they are responding to a mix of gender-based and gender-neutral traits.  For others, however, gender-based traits are largely or totally irrelevant.  As Dr. Diamond notes in her book Sexual Fluidity, some people can “respond erotically to anyone with a desirable personality or with whom they have a strong connection, regardless of that person’s gender.”  These individuals often describe themselves as being “attracted to the person, not the gender,” a phenomenon to which she devotes a chapter of her book.  These person-based attractions challenge the commonly-held assumption that gender is the basis of everyone’s attractions to others.

Myth #6:  A person’s sexual orientation is unchanging throughout their lifetime.

Second, whereas some people experience their emotional and physical attractions becoming more focused toward males or females over time, others have the opposite experience.  Some adults who have historically experienced only same-sex or other-sex attractions find themselves having one or more experiences that expands their sexuality as they grow older.  For example, a woman who has loved only women may fall in love with a man (probably to the confusion of her lesbian friends), and she may revise her sexual orientation identity from lesbian to mostly lesbian or bisexual.

Myth #7:  A person can change their sexual orientation from gay to straight if they really want to.

Because the mix of emotional and physical attractions toward males and females can change over time for some people, anti-gay advocates have seized upon this phenomenon as “proof” that a gay person can become straight through certain interventions, usually a combination of prayer and “reparative therapy.”