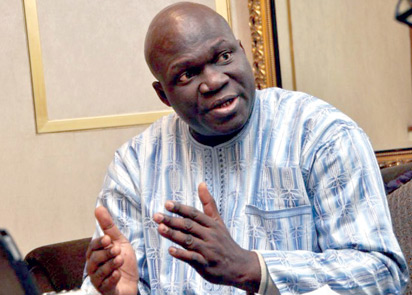 This he did at the just concluded human rights event tagged “Human Rights, Sexuality and the Law” organized by TIERs in collaboration with Ynaija which took place on the 14th of December, at Fours Points by Sharaton, Oniru Victoria Island, Lagos Nigeria.

His selection to function at the event as a keynote speaker sparked controversies amongst members of the Nigerian LGBT community, including Bisi Alimi who objected and expressed that giving him a prominent spot at the event to speak as a ‘keynote speaker’, was not ideal following his previous homophobic statements which he made at a panel when deliberations on the anti-same sex marriage bill was discussed.

According to Bisi Alimi and others who disapproved of his participation at the event, Abati made some very serious homophobic pronouncements, in some of which he was said to have called LGBT persons pedophiles.

He was also accused to have gone on public television to promote, support and defend the anti-gay bill after it was signed into law.

But at the event, he defended himself from any wrongdoing saying that he was only defending government policies which were part of his many responsibilities as a spokesperson.

“I was speaking as a government official, I was trying to explain the position of government to the public and to the international community, because the passing of that law became very controversial” he said.

But surprisingly, Abati even though did not present any form of an apology to the LGBT community who have been gravely affected by the laws put in place by an administration he was a part of, seemed to have taken a new stand on the issue of homosexuality, and noted clearly that human right is for everyone regardless of a person’s sexual orientation.

He further stated that Nigeria is not an exception when it comes to issues of human rights as the country is a signatory to other international treaties.

“The dignity of a human being is without exclusion… the discussion of human rights, whether in relation to sexuality or any other subject, should be open and exclusive” he said.

Speaking on the Same Sex Marriage Probation Act (SSMPA), Abati referenced several sections of the law and noted that there are several contradictions. He said;

“If you look at the law itself, there are contradictions. There are very clear issues that will require an amendment or a repeal of the law”

He also noted that several sections of the law are vague; specifically condemning section 4 and 5.

“On the grounds of these, the law expressly criminalizes two persons coming together, hugging each other. If that section is misinterpreted, then you could have a situation where such persons are attacked”

In his final note, Abati charged civil society organizations and members of the general public to continue to insist on human freedom adhering to the 30 basic universal human rights declarations.

The LGBT community in Nigeria remains aggrieved and continues to insist that the law against LGBT persons in the country is unconstitutional, and so wishes that it is revisited or repealed as once mentioned by the ex president, Goodluck Ebele Jonathan.

Homosexuality is criminalized under Nigerian law following the enactment of the Same-sex Marriage prohibition act in 2014.

The law also prescribes a jail term of up to 14 years for convicted persons as well as the imposition of fine.

Click here to watch a video of the event.