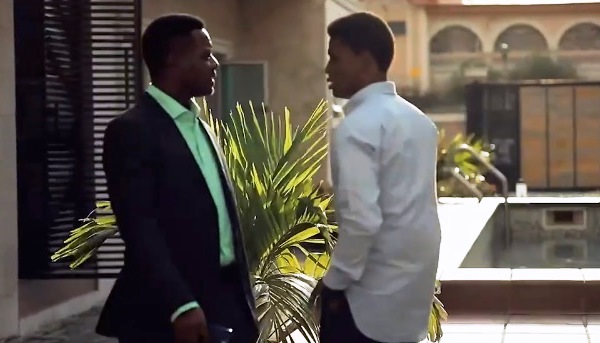 Screenshot from the film. Source: Nvivo.net

Many young Nigerian men, deceive gay men into believing that they are gay with an intention to rip them off. Most times things get very ugly for both parties, but more often, gay men are mostly blackmailed and extorted if they refuse to keep up.

However, Jombo’s new series ‘Social Media Slay’ addresses and highlights the issue from a whole different and interesting perspective with an exciting twist.

The reality/drama series is based around real-life experiences of people living fake on the internet.

Episode 3 of the series is a must-watch, especially for those thinking about deceiving gay people for financial gains.

This is particularly exciting as we are beginning to witness an era where queer issues are being objectively addressed in the Nigerian mainstream media.

- May 6, 2020
TAGS BlackmailFILMGAYNIGERIANollywoodSEXUALITYSocial Media SlayUche Jumbo
NEWER POSTNigerian youth surprised at brother’s response after he came out as gay
OLDER POSTHere’s an old short film with a Nigerian gay character worth seeing