A group of girls have been arrested by the Benue state police following suspicions that they are lesbians. 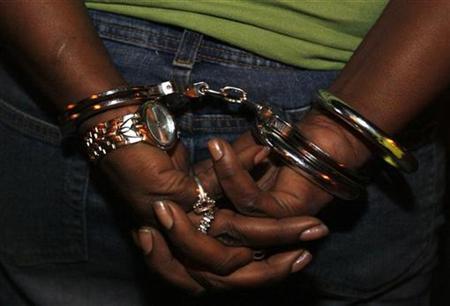 This image is for illustrative purposes. Image Credits: http://tembisan.co.za/

Reports reaching NoStrings concerning the incidence reveals that the girls were arrested at a party last week Sunday at about 7pm in the evening and are still being held in a cell at Otukpo main police station where they were taken to.

The number of girls that were arrested remains unknown, as further investigation into the issue may hopefully reveal the total number of victims involved.

Currently the issue has generated a lot of concerns in the Otukpo community, as there are speculations that the police will make further arrest of not just only suspected lesbians, but people suspected to be gays as well.

The source also revealed that the police have further threatened to charge the matter to court, but it is not certain when they are looking to do this.

The hunt is still on, not just only in Otukpo community, but homosexuals all over the country are completely unsafe as they are constantly being hunted by homophobic individuals and law enforcement agents whose main aim is to make money off persons suspected to be members of the lesbian, gay, bisexual and Transgender (LGBT) community.

Nigeria has been ranked one of the most homophobic countries on earth, yet it tops the list of countries with the highest number of interest for internet gay contents.

NoStrings calls on all authorities/persons concerned to look into this issue, as this is a gross violation of human rights.