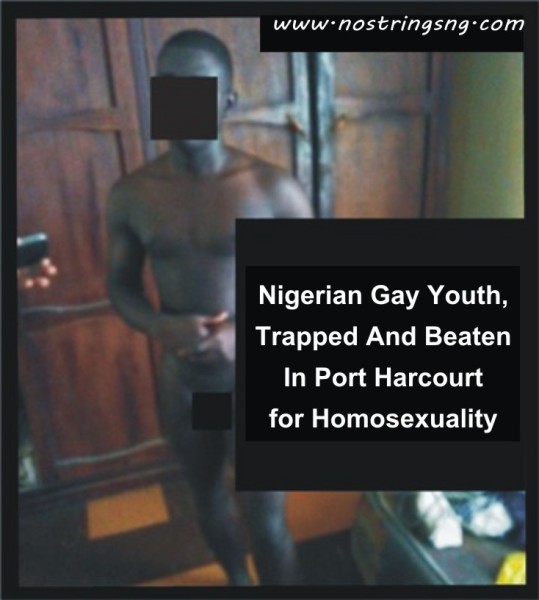 A young Nigerian gay man Abraham who looked between the ages of 20-22, was trapped in a house with another young man who lured him into coming over to his house after they had several conversations with each other on the interactive whatsapp media chat application.

Upon arrival at the scene of the incidence, NoStrings figured that the room was already filled up with people holding plank sticks as they were slapping and beating the young victim up. “he was naked, and begging that it wasn’t his fault that he was gay, and that he has been trying to change for some time, but has failed each time”

In a further inquiry, Abraham the victim, revealed that he knew this guy from a chemist where he goes to get drugs for his asthmatic mother, as other young man sells and manages the chemist. He further states that he has been good friends with this guy for some time and that they have been having regular conversations both on phone and on different chat applications. He relates “we were only chatting as good friends until when he inquired about why I was so serious with him, and if I was in love with him” he continues “I told him that I really liked him and that I felt like I was with a woman each time I was with him, so he invited me over so we could see to talk more, that was when I decided to go see him”

“I realized I was gay in 2008, while I was still in school, and ever since then I have found it really hard to stop”

The guy who organized the setup revealed to NoStrings, “I knew this guy was a homosexual when he started calling me frequently and constantly wanting to meet me” he continues “he comes to get drugs for his asthmatic mother from my chemist, and that is when we exchanged numbers, I travelled to Lagos for my football training and came back, and that was when we agreed to meet”

“I actually thought he was joking until when he came to my house, and asked that we have sex, that was when I excused myself to go to the bathroom to call my friends on the phone, who mobilized friends and neighbors, however, I have asked them not to beat him, but really I may not be able to help the situation if they go against that”

“right now, we are waiting for his parents to come, so that we can inform them of the situation, so that they can know what their child is doing, we wouldn’t want to proceed with arresting him or anything of that nature, as the family is a good customer and they do not have money to get him out of the situation if the matter goes to the police” he concluded.

Abraham is not out to his parents, but if his parents finds out about the situation, he may face rejection. “The people I live with are not my biological parents, I only came to Port Harcourt to help them, and if they find out, they may send me back to the village” he said, with his almost fainting voice as he faced down with shame.

“Here in Nigeria, the police may not charge the matter to court but will want to allow the victim bail so they can make money, this is a frequent occurrence”

“The situation in Nigeria is bad to an extent that even young people are organizing groups to trap suspected homosexuals, either via social media networks, or from social meeting places and luring them into coming over to their houses. And upon arrival they will ask their victims to strip naked and pretend to be in co-operation while they make calls, seize their clothes and sometimes threaten to expose them, or will collect valuable items from them, and then give them another clothe to wear back home”

“The only way to do avoid these kinds of things from actually happening is to make sure you confirm from other people within the gay community if they can recommend someone, before agreeing to meet them that is if you must meet someone at all. Also, do not agree to meet people in their house at the very first meeting, instead agree to meet them in an open environment first, at a neutral place that is far away from each others house, but if anyone disagrees, then the best thing to do is to just quit the arrangement”

“Finally, Stop obsessing over people you know that are not homosexuals, or that you are not sure of their sexual orientation, regardless of how they look, this can lead you into wanting to try out your luck, and this could be really dangerous as you could be trapped and exposed”

NoStrings Podcast gathered the complete detail of the incidence in this episode of the podcast, as the entire conversation was captured in voice both from Isaac the victim and the other young man who organized the setup. Use the download link to listen.

Please note, we have only used his first name to protect his identity.