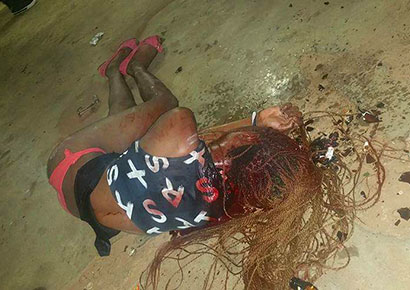 A young gay man in Limpopo was nearly killed by a homophobic assailant, only to be arrested when he tried to report his attacker.

Activists are outraged at the news of another suspected LGBT hate crime, this time in the town of Thohoyandou.

According to reports, Tshifhiwa Ramurunzi, 21, was attacked at a bar in the town on Thursday night while wearing traditionally female clothing.

The victim, who identifies as gay, claims that he was harassed by a man because of his appearance. The verbal abuse escalated and Ramurunzi was beaten and stabbed outside the bar.

He was left bleeding on the ground, surrounded by a pool of blood and broken beer bottles as onlookers took pictures of the scene.

The photos were posted on social media, along with claims that he had been killed. Activists from Limpopo LGBTI, Univen LGBTI and the Thohoyandou Victim Empowerment Programme (TVEP) investigated.

They discovered that the victim had been taken to the hospital and was in fact alive.

“We tracked him down,” Victor Raedane from TVEP told Mambaonline. “He stays in a remote village outside the town. We found him sleeping on the couch on Saturday, still bleeding with many stitches.”

Ramurunzi agreed to go to a trauma centre in Thohoyandou and to report the attack to the police.

Shockingly, when he laid a charge at the police station on Monday afternoon he was arrested because his alleged attacker, who was also arrested, had filed an assault charge against him.

Infuriated, the activists gathered outside the police station in protest against the arrest. After they spoke to a Brigadier Linda, Ramurunzi – who was still recovering from his wounds – was placed in a single cell for his protection.

“He was detained in his bleeding condition,” said a distraught Raedane. “He has so many lacerations, on his face, back and front.”

On Tuesday morning, after the prosecutor reviewed the statements in the case, the charges against Ramurunzi were dropped and he was released. It’s expected that his alleged attacked will be tried, possibly for attempted murder.

“He [Ramurunzi] is now with members of the LGBT community,” said Raedane. “We are referring him back to hospital and finding a safe house where he can recuperate and to make sure that he is safe.”

Lerato Phalakatshela, Hate Crime Manager at OUT LGBT Well-being and spokesperson for the Love Not Hate campaign, described the attack as “horrific”.

“It’s quite scary and shocking that a human would attack another human like that,” he said.

“It’s also a clear indication of secondary victimization of the victim by the police. How do arrest somebody that’s in that condition?” he asked.

Last month, Lucia Naido, a young lesbian woman, was stabbed to death on the night of her birthday in Katlehong on Johannesburg’s East Rand, in another suspected hate crime.

Mambaonline has learned that the much vaunted government-led “Rapid Response Team”, which is meant to monitor and fast track LGBTI related hate crimes, last met almost a year ago, in June 2015.