Nigerian Bisexuals Speaks! “We Are Not Cheats!” 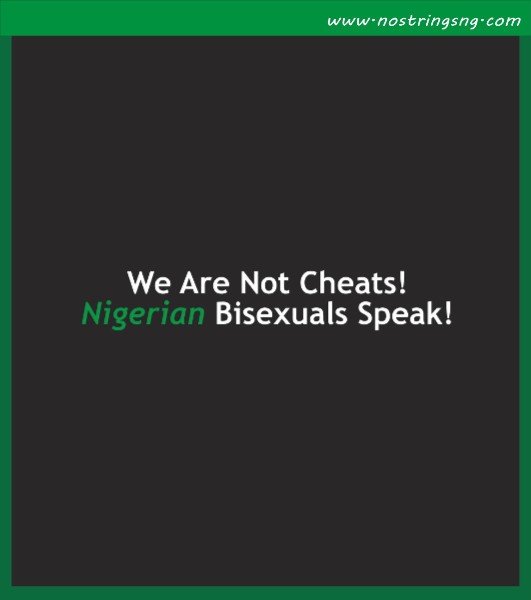 There are so many negative misconceptions surrounding the issue of bisexuality, as so many people have their own different perceptions about the subject, which is often very negative, something that could be described as biphobia.

Some people believe that bisexuality is not a real sexual orientation and thus believes that it’s just an experiment, and for some who believe that for real, there are bisexuals, they sometimes conclude that bisexuals are sexually unstable, and so therefore can never be trusted.

Some people also believes that bisexuals have it easy surviving in homophobic countries, and have the advantage of comfortably fitting in as straight and for these, some gay and lesbian people feel that bisexuals are using this[advantage] as an edge to look down on them.

Marriage for bisexuals has always been questioned by many, as many imagine that bisexuals will not be very comfortable and satisfied in single monogamous relationships.

Gay, Lesbian, and Bisexual activities have been made illegal in the country [Nigeria], as a result many bisexuals who eventually fall in love with members of the same sex do not proceed, or are unable to marry each other and so rather end up, or are forced by the law to marry people of the opposite sex, and they never end up with their choice partners, and for this, they will have no other choice but to continue to seek sexual satisfaction outside their marriage, and thus painting a very negative picture of bisexuality.

NoStrings in a bid to tackle the many different issues concerning bisexuality, and weigh people’s opinion on the issue, decided to have discussions with people, both Nigerians and people from other countries. The discussion has been divided into two parts. The first part will be this episode with Goodmade, a Nigerian bisexual man, and Jerry, a Nigerian gay man.

Goodmade, who identified himself as a married bisexual man with a son, expressed his concerns and what it means for one to be a Nigerian bisexual, and why some Nigerians claim to be bisexuals, while in disguise are actually gays. Then Jerry, who identified as a gay man, expressed that he does not have issues with bisexuals, and that in fact, he can be in a relationship with a bisexual so as long as that person will dedicate some quality time for him, when he needs it.

The later part of this discussion will be with one of our female bisexual Ghanaian who now resides in Canada, and Frank a bisexual Nigerian Man. The final part of this episode will be released at a later date in a new week, as a follow up.

Below is a list of the different questions that were dealt with on the podcast.

Get answers to all the above questions in this episode by clicking on the download link above under the episode poster to listen to the full conversation with these people.

The concluding part of this discussion will be released at a later date as a follow up in the upcoming week, so to join all our future discussions/conversations and to participate, please use the following information below.

Or send us an email using info@nostringspodcast.com

- November 27, 2017
TAGS biphobiaBisexualitycheatsGoodmadeHOMOPHOBIAJerrymisconceptionsNIGERIAnostrings
NEWER POSTMy Father Is Torturing Me Because I Am Gay – Joseph, A Nigerian Gay Teenager Cries Out!
OLDER POSTNoStrings Teams Up With Kenny Brandmuse!