My Father Is Torturing Me Because I Am Gay – Joseph, A Nigerian Gay Teenager Cries Out! 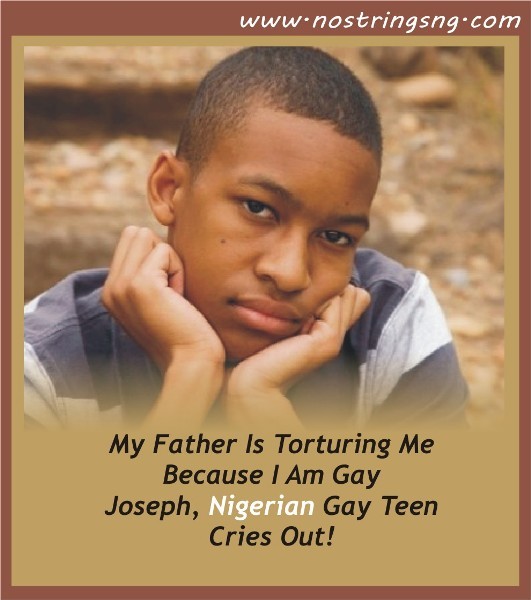 In this episode, NoStrings sat down in a discussion with a depressed 16years old Nigerian gay teenager [Joseph] who is now suffering and being tortured both physically and verbally at home by his father and entire family, ever since he disclosed his sexual orientation to his sister in confidence.

According to him, the whole problem started when he felt that he could trust his sister by disclosing to her about his sexual orientation.

“I needed someone in the family to know about my sexual orientation, as I started feeling very depressed, and I just needed to tell somebody about how I was feeling and what I was going through, I needed a member of my family to understand that I did not just become gay, but that I have always been gay”

Joseph battled with depression for so many years as a result of his battle with trying to understand his sexual orientation.

“I battled seriously with depression at some point in my life and still do up till today, and somehow at the time, I think my sister observed that I had become withdrawn, and so decided to find out what was going on, she persuaded me, and I eventually gave in, by admitting to her that I am gay”

“But after telling her, she insisted that I must have had a sexual encounter with somebody, and as a result, the experience made me gay. I tried to explain to her that this was not true, but she argued about it”

Joseph went further to explain, that a few months after that episode with his sister, his step-mother called him into a room, and told him about a dream that she had about him.

“My step-mother called me into her room, and told me that God had revealed to her in a dream that I am gay, and that I will die if I do not admit to her and embrace change. I was going through a lot at the time, so I admitted to her that I am gay. I guess she must’ve disclosed it to my father and that was when the real trouble started”

All did not go down well with Joseph, as it appeared that either the mother or the sister disclosed everything to Joseph’s father and he did not take things easy at all.

“My father did not take it easy at all, he called me all sorts of names, and started telling me about how some people have killed their gay children, how some group of people are looking forward to tying and killing gay people within the neighborhood. He also claimed that some of his friends told him that gay people can change, if people help them by talking and advising them out of it”

“My family does not see me any longer as a human being, I am being constantly abused both verbally and physically, and my father is bent on making me change, since the whole incidence, he doesn’t let me breathe, he has been taking me to this particular church, where they’ve been revealing different things about me and my future, and he constantly preaches to me about immorality, citing my sexual orientation as the cause of my misfortunes and related it to even the reason why I failed my senior school exams”

Joseph is tired of the whole situation, and is seriously depressed, he wishes and is about to run away from home, as he is unsure of what the future holds for him. His father is no longer talking about helping with his education.

“Am just tired, the prayers, the abuses, and the hate I see in my family’s eyes, seriously, I am just tired and exhausted, and it’s like am being constantly monitored. They are always bringing up the subject, and my father is always asking to know if I am praying about my ‘problem’ and constantly reminding me that hell awaits me if I do not change. I am planning on getting away from home, there is no future for me anymore at home, I need help!”

Joseph regrets his very actions, he thought that he could trust certain people, especially family members, but has now come to understand that you need to know people really well and how they relate with the subject of homosexuality before disclosing to them about your sexual orientation regardless of who they are to you.

“I regret trusting my sister and my step mother, now they have succeeded in destroying my life, thinking that they are helping me”

Joseph is now being counseled by someone here at NoStrings, and we are trying to see what’s available for him.

Currently in Nigeria, because of the draconian law that criminalizes homosexuality, much help may not be available for him.

If you are thinking about coming out or disclosing your sexual orientation to anyone, please click HERE.

To listen to the discussion with Joseph, please click the download option under the episode poster above

Have you been harassed, assaulted, or abused as a result of your sexual orientation? Please, do not further increase the burden that you experience by suffering in silence, share your story and experience. Doing this will further expose the horror and agony experienced by LGBTIQ persons in the country, (Nigeria) to do this, then send an email to info@nostringspodcast.com

To join all our future discussions/conversations and to participate, please use the following information below.