Depression in the leading cause of the high rate of suicide, and substance abuse in Nigeria, that is a huge problem to tackle for the country, now imagine being a gay, lesbian, or transgender person, having to live with the day to day horrors of being queer in a place where it is not accepted. Yeah, triple the effect. To survive from the scrutiny of the public eye, many LGBT folks have developed a sixth sense used specifically to observe and read a situation to determine how much they can safely be themselves. 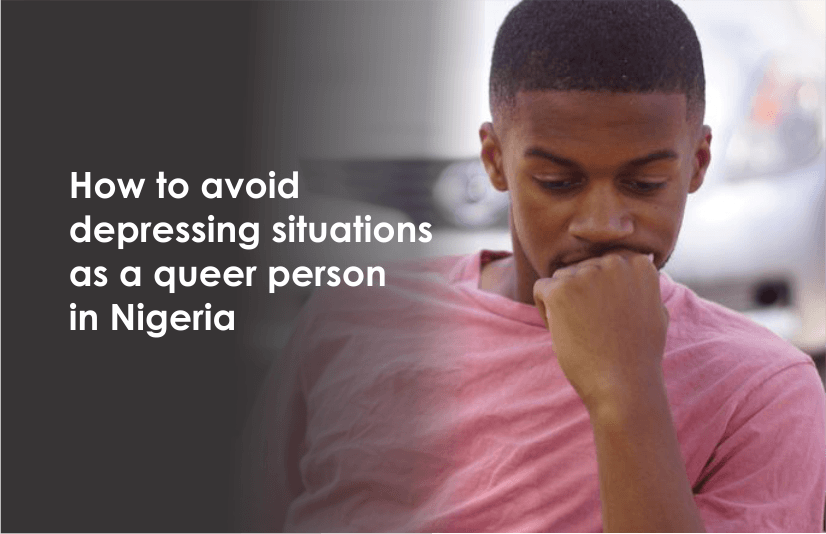 The law and its impact on LGBT mental health

The SSMPA (Same Sex Marriage Prohibition Act) in Nigeria, which promises anyone found guilty of same sex practices within Nigeria, a free ticket to be prosecuted and rewarded with a 14-year-jail-term also significantly contributes negatively to the health and well-being of any LGBT person in Nigeria as it subtly permits the crimes committed against LGBT people, including physical and sexual violence. LGBT victims of crime said the law inhibited them from reporting to authorities due to fear of exposure and arrest.  They said there was no way to file a complaint, and so had to bear the pains of being harassed every now and then, while some became a constant source of income for the policemen who knew about their sexuality and in their promise to keep them out of jail, extort them demanding things that are hard to pay. This alone is enough to drive a sane person into a life-long battle with drugs and eventually, a need for everything to end. (suicide)

Results of Homophobia and Transphobia on the Mental health

The LGBT community in Nigeria has been reported to suffer a great deal of mental illness, depression, being one of many. The mental stress involved in living in constant fear of being outed, having to live in silence, sometimes practicing how to behave, to cover up mannerisms that could call your sexuality into question is a huge burden that comes with a price. Psychologists refer to the process of dealing with persistent prejudice and discrimination as minority stress. Many studies have shown that it has powerful, lasting, and negative impacts on the mental health and well-being of LGBT folks.

Possible cause of Depression

In a report by Bisi Alimi Foundation titled, “Not Dancing to their Music”, members of the LGBT community identified rejection by their families and friends as one of the main reasons for not wanting to come out. This increases the likelihood of self hatred and eventually leads to severe mental distress. In addition to rejection from their families, members of the LGBT community also face isolation, social exclusion, and are subjected to violence in many cases. Thus, it is not difficult to understand why many LGBT Nigerians find themselves depressed, abusing drugs, and harbouring suicidal thoughts.

LGBT individuals who got outed to the family and lost their right to stay in the house they were raised, often find it hard to move past such trauma, as they must fend for themselves on the street, these uncomfortable conditions put pressure on one’s life and after a while, hope of it getting better begins to seem bleak and hopelessness is a path to depression.

Depression is one of the leading causes of high suicide rates in Nigeria, Africa, and the world at large. It plagues the individual with a feeling of gloom, which often comes with symptoms of anxiety that can become chronic or recurrent and lead to a significant impairment in an individual’s ability to take care of his or her everyday responsibilities, and eventually, if left unattended, could escalate to suicidal ideation (thoughts,) or worse suicide (acts). It is important to seek help from LGBT organizations if you feel you are battling depression as a LGBT person in Nigeria. Most importantly, stay safe and always look out for your wellbeing.