My Parents Took Me To A Shrine Trying To Cure Me Of Homosexuality! – Anderson, Nigerian Gay Man Says 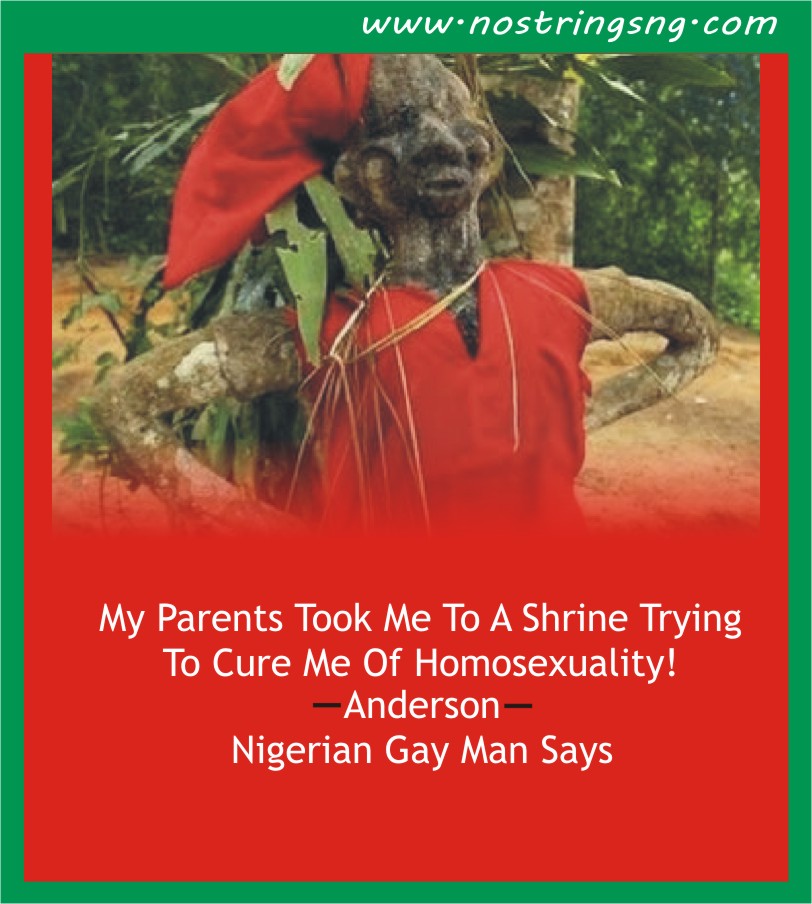 In Nigeria, many parents and families are still very much ignorant about the subject of homosexuality and still holds strongly to the belief that homosexuality is unnatural, an illness, a choice or a sin and thus; something that should, or can be cured. Our conversation with a young 21 years old Nigerian graduate, who now resides in Lagos, will further prove that one’s sexual orientation is not a choice, and can never be altered.

NoStrings had a telephone interview with Anderson, (not his real name) who shared a story on the podcast about what he suffered in the hands of witch doctors [commonly known here in the country as a native doctor, or a babalawo in some parts of the country, Nigeria ] and a Christian religious priest/pastor, who tried to cure him of homosexuality. He further provided details about how his parents got to discover that he is gay and how they reacted to it.

He said of his childhood and growing up:

“Growing up here in Nigeria with my family was fun, but when I got to know about my sexual orientation, I felt like I was the only one in the world”.

“For me it was something that has always been there, but I became slightly conscious of it at age 7. I will see myself getting sexually attracted to guys, but a full realization for me happened when I was watching a Jerry Springer’s show when it discussed a subject on same sex marriage, and all of a sudden I somehow felt strangely concerned and became moody as I reflected on the issues that were discussed on the show. A cousin noticed my change of mood, and asked to know what was going on with me, so I explained to her about how I felt about the show and how I strangely felt connected to it, and then she said to me that it doesn’t happen here in Nigeria, and that it only happens in the western world.”

Few years had passed, and Anderson got admitted to study in a Nigerian University, there he met someone, and they began to date. He said of the experience:

“I met someone and we agreed to date, but after some time, I figured that I wasn’t getting the needed attention, and that the relationship was heading nowhere. So I told him that I was going to quit the relationship and change my sexual orientation. He laughed and told me that its very impossible, and there was no way I’ll be able to quit”

When Anderson got home, he had an episode with his mother, who questioned his uneasy mood and that was how at age 19 he revealed his sexual orientation to his mother, he said;

“After the incidence, when I got home, I became so worried, and since I am very close to my mother, she noticed and asked, so I explained everything that had happened to her, she immediately shouted at me and finally broke down in tears, broken, and then became very confused afterwards, but then later afterwards became calm and requested that I show him to the young man whom I had been in a relationship with, but I insisted that, there was no use, and that the only reason why I told her was that, I needed her to help me change”

But, things did not go down well at home when Anderson’s father came to discover that his son is gay, he became worried and disturbed, and decided to do something to change his son’s sexual orientation.

“When my father found out, he became very worried and decided to take me to a church. There we met with a Christian priest/pastor who claimed that it was a spiritual problem, and that I was married to an evil water spirit who lives under the water, and so therefore asked for thirty thousand naira (N30,000.00) to buy items for cleansing. Afterwards he provided soap and asked that I use it for bathing, claiming that it will cure me from homosexuality”

But even after Anderson correctly applied the soap, nothing changed. He said;

“After like a week or so, the soap finished and the feeling were still there. So, I explained to my mother that the soap obviously wasn’t working and that I still had the feeling, and she immediately informed my father who became furious and was so unhappy about how he wasted so much money on a fake soap, but this time suggested that we opt into something more stronger, so he finally concluded that we meet with a witch doctor at a shrine. Upon meeting with this voodoo priest, he claimed that he could handle the situation, and finally collected some money from my father to prepare some charms. After a few days, he asked that my father come back in a few days to collect some herbs and instructed that I use it to have my bath every night before I sleep, but upon each application, my body will react to these herbs and became very itchy and I somehow started having rashes all over my body, so when I told my father about my experience, he said that it was supposed to react that way and that it was a sign that it was actually working”

Anderson knew that the feelings that he has were not going away, and knew that he had to stop, given that he was not comfortable with how the herbs reacted on his skin. He said;

“I could not deal with the torture any longer, so I lied to them that everything had stopped and that I was no longer having feelings for men. Telling them this, made them very happy, and my father said he knew that it would work”

Anderson still lives and enjoys his life as a gay man, even though he still hides his sexual orientation. This is due to the current same sex marriage prohibition law in the country that criminalizes homosexuality. He said;

The conversation with him was very insightful, full of lessons, and will sure change challenge your views, especially if you are one of those people who still strongly believes that homosexuality can be cured.

Do not be deceived; listen to the truth by clicking on the download link above under the poster.

Please note: We have used the name ‘Anderson’ to safeguard the participant’s identity.

Have you been harassed, assaulted, or abused as a result of your sexual orientation? Please, do not further increase the burden that you experience by suffering in silence, share your story and experience. Doing this will further expose the horror and agony witnessed by LGBTIQ persons in the country, (Nigeria) to do this, then send an email to info@nostringspodcast.com

- November 26, 2020
TAGS AndersonHOMOSEXUALITYIllnessLagosNIGERIAnostringsSexual OrientationShrineSinTABOO
NEWER POSTNoStrings Teams Up With Kenny Brandmuse!
OLDER POSTMy Mother Asked My Brother To Beat And Injure Me Because I Am Gay, I Have Now Been Disowned” – Victor, A Nigerian Gay Man Says