My Mother Asked My Brother To Beat And Injure Me Because I Am Gay, I Have Now Been Disowned” – Victor, A Nigerian Gay Man Says 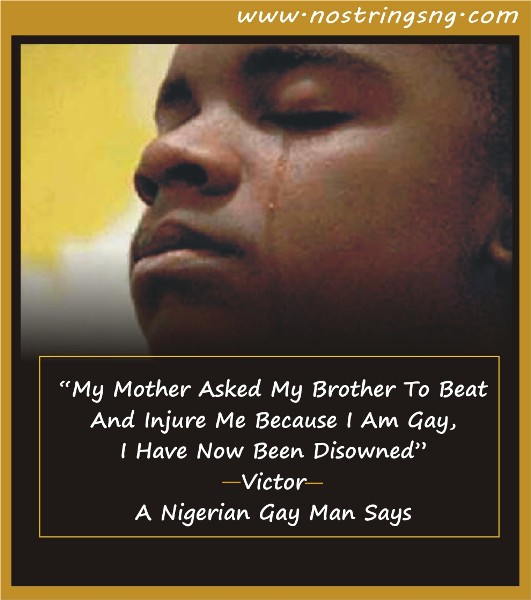 NoStrings joined up with Victor, a Nigerian University student, who shared his very personal and painful story about how he struggled for so many years with his sexual orientation, and how his family handled the situation when they discovered that he is gay.

Growing up in a heavily religious country like Nigeria wasn’t quite easy for Victor at all, as he said “I grew up in fear and a lot of confusion, also, I won’t say I had the best of my childhood. When I realized that my sexual orientation was different, I got scared, I thought it would pass” he continued “it was obvious I was different from a lot of people, and when people noticed that I was effeminate, they started calling me all sorts of names like; woman wrapper, girl, woman”

He further recounts that when his mother found out about him, she broke down and cried, and this lasted for days. He said “My mum did not take it like every normal African mother; she cried for days, called me all sorts of names like, Anti-Christ, black sheep of the family, a disgrace, she said I should disown her, just as she has disowned me, that she doesn’t want to have anything to do with me again, she said she wouldn’t be responsible for anything that concerns me again, including my education and everything. She warned my entire sibling to stay away from me and not to have anything to do with me again”

With the family finding out, life became hell for Victor at home, the entire family turned their back on him, and with the permission from his mother, his siblings started tormenting him by stealing and collecting his items and abusing it, he recounts “my elder brother became a monster, my younger brother all of a sudden started calling me different horrible names, and intentionally hurting me, and getting on my knelf, he’ll steal my phones, steal my shoes, because he knew I wouldn’t be able to report him to anyone as everybody was against me” he continued “my brother and I became real enemies ever since then, he told me several times not to even drink from a cup that he drops, he also threatened to kill me several times, he has also physically assaulted me several times, inflicted a lot of injuries on my body, leaving me with a scar on both my hands and on my head”

Dealing with rejection from his family for him was not easy, He said “I questioned God, I took a lot of pills, I wanted to end it all, I wanted to kill myself, but thanks to my neighbors and my sisters who came to save me” he continued “at a point I left the house, thinking when I’ll return, everything would’ve changed. I was frustrated and depressed, because my education was stopped, I had to start fending for myself, and I took on odd jobs to survive”

When asked about his father and the role he played in all that was happening or if he was aware at all of what was going on with him at the time, he said “I lost my dad in 2006”

He describes his current relationship with his family as ‘distant’ he said “I see them once in a blue moon, and when I see them, I don’t feel anything, I don’t miss them, no emotions, no family bond between us any longer”

But luck met him when he found a lady in church whom he now calls a God-mother. The woman took him in as a son after listening to his story he said “I met her in church, we were actually in the same study group, just like a library, a place where I go to when I feel like just to read, that was where and how I met her, we got into talking, and I explained everything to her, she said she appreciated the way I explained everything to her without the fear of being judged, she felt OK with everything, because she’s exposed, and she has studied in England, even though she stated that she is not in total support of it [my sexual orientation], but she expressed that since it is not a choice for me, so therefore she’s just ok with me as a person, she loves me and she is cool with me, and since she doesn’t have a child of her own, she now calls me her son, and ever since then, has been supporting and financing my education”

He further states that he wishes that things were different for him though, as he would’ve loved his mother, and siblings to understand him for him and not focus so much on his sexual orientation. He said “I really wish that things were different, I wish I had a family to call my own, I wish my family will understand that my sexuality is not a choice, and that I am born this way, I wish I had a family I can go back to after school, I really wish my dad was still alive, because I would’ve opened up to him, because I think he would’ve understood me”

When asked about his current look on life, he says with a troubling voice “Life to me is misery, I have two brothers, why me? Why not them? Basically I look at life as not fair, and sometimes I say to myself, life is what I can make out of it”

Nigeria is among the 38 African countries out of 76 countries where homosexuality is illegal. The country’s law punishes citizens who engages in same-sex relationships with 14 years prison sentence and death penalties in its Islamic states under the Sharia Law.  A recently signed Same-Sex Marriage Prohibition Act in the country by president Goodluck Ebele Jonathan in February 2014 promotes and encourages violent attacks both from within the family circle and the general public against LGBT people in the country [Nigeria].

Things of this nature reported here, happens every day in the country [Nigeria], but the questions that I have continued to ask when situations like these happen are;

Please note: We have used the name ‘Victor’ to safeguard the participant’s identity.

Have you been harassed, assaulted, or abused as a result of your sexual orientation? Please, do not further increase the burden that you experience by suffering in silence, share your story and experience. Doing this will further expose the horror and agony witnessed by LGBTIQ persons in the country, (Nigeria). To do this, then send an email to info@nostringspodcast.com