A group of Nigerians have formed a movement to fight homosexuality in the country, and are now seeking for money to do it. 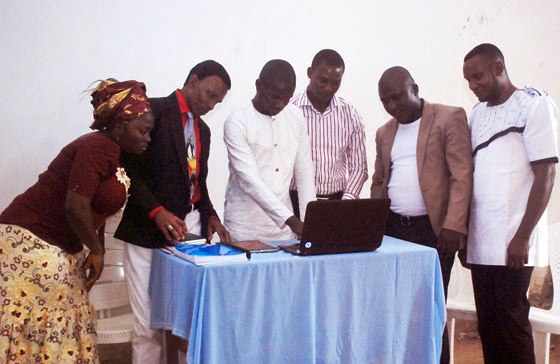 Dominic Idlo third from left with his group at their August 14 meeting.

MassRessistance, an anti human rights organization which was founded in 1995 is now re-strategising with new plans to promote their hate messages in the country. The movement is headed by one Dominic Idlo, serving as the country’s director.

The organization recently joined forces with Dominic Idlo, a Nigerian, who is apparently using the opportunity to sell his poorly researched 150 page book which he titled “Dimensions of Gay Struggle – an African Perspective”. The book’s overall claim is that homosexuality threatens the traditional family.

The bigoted activist claims that the West is pressuring Africa especially Nigeria to accept homosexuality, and outrageously compares homosexuality to pedophilia. The website stated;

“In countries such as Nigeria, Uganda, Kenya, people are very aware of the destruction that widespread homosexual behavior brings to society and especially to children.

“As a result, this region of Africa is the target of the aggressive pro-LGBT Obama administration pressure to force this radical agenda on the country, including threats of cutting off foreign aid. At the same time the Obama administration has spent hundreds of millions of dollars funding insurgent movements in these countries to undermine the culture from the inside, often in collaboration with billionaires such as George Soros.

According to their website, Dominic with his new formed group in Nigeria plans to set up an operational office in Abuja.

The organization deceptively claims to be a pro-family activist organization that educates people to help them confront the attacks on the ‘traditional family, children, religion, and society’.

The organization also on its website, states that other anti human rights groups have not accomplished much, and so therefore, they have adopted an aggressive style approach to forcefully decide for others how they should live their lives.

According to their website, they need money and more hands on deck to achieve this, and so, they are currently recruiting like minds into their fold.  The website stated;

“We welcome people from everywhere who are willing to be part of this counter-revolution.

It appears that they already have supporters in different parts of the world as stated on their official website.

“We have supporters and activists in all 50 states of the US, Puerto Rico, and in over a dozen foreign countries.

So far, the organization boasted to have joined fights obstructing the human rights of others in many countries including Nigeria. Their website stated that they were used by anti human rights activists to lobby members of Parliament in Australia to successfully stop “gay marriage” (2012-13), and also in Singapore to a pass a special pro-family law in 2009, and as well fought the marriage battle in Finland (2014).

The hate group and promoters of lies misleadingly describes homosexuals as ‘anti-family forces’. This is completely untrue as it is obviously factual that a whole lot of gay people want to have families of their own, have children, form healthy relationships, and lead peaceful lives.

Clearly this organization can’t be ‘pro-family’ when all their efforts are fixated on fighting and obstructing people from forming families, and building homes.

Lets keep an eye out, as hate is on the way.

Have what to say? Leave comments below.