The struggles of lesbian, bisexual and queer Nigerian women – Owen

Owen a female Nigerian based sexual rights activist has revealed the deep struggles of lesbian and queer women in Nigeria. 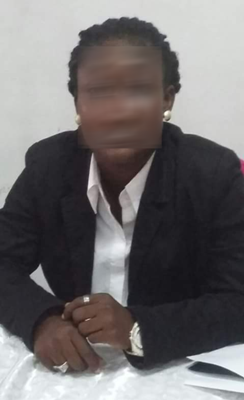 Owen – With face blurred out for security reasons

In a recent interview with NoStrings, the activist spoke extensively on the different issues affecting women, especially lesbian, bisexual and queer women in Nigeria.

Owen currently serves as the executive director of an organization whose vision is to promote the rights of vulnerable persons in the society, particularly women.

She said that through her organization, she provides and in some cases refers people to facilities where they can gain access to free HIV testing and counseling, psycho-social support services, capacity building and more.

Owen who also identifies as a feminist, says that her work and advocacy sometimes extends to lesbian, bisexual and queer women, seeing as they are under-represented in the country, and also as her work reflects her strong belief in equality for all. She said;

“I have always believed in equality since I was a child, and this has drawn me to offer my services to people without any form of discrimination.

Owen also revealed why queer Nigerian women are not speaking out loud on issues concerning sexuality. This she attributed to fear, pressure and the lack of education. She said;

“Most queer women in Nigeria that I have spoken with are afraid of speaking up because of the stereotypes associated to their gender. Some are either married and have children, or are not well informed and educated and so they just bow to whatever the society is telling them, while many are particularly concerned about how speaking up will affect their families.

She also said that lesbian, bisexual and queer women are faced with a lot of challenges in the country, a few of which she identified as forced marriage, rejection, homelessness and discrimination. She said;

“Many often become very unhappy and depressed with life as they are stereo-typically pressured and ultimately forced by the society to settle in marriages with the opposite sex. Eventually, when they settle in these marriages, they experience a lot of trauma and at the very end becomes unfulfilled.

“Also, a lot of the women that I have met with, have experienced a high level of discrimination; many have either been disowned, rejected. I reference my experience in Owerri where I do most of my work, I meet with a lot of young girls who have been rejected by their families because of their sexual orientation. And these young girls practically live in an open stadium – Anyanwu stadium precisely. Their lives are in danger, it’s a pity what they go through.

“Nobody is listening to them; nobody cares about how they truly feel, all that matters to many is that they do what is being expected of them.

Owen also stated that her work does not come without meeting with different challenges, citing the country’s anti same-sex prohibition law and religion as major issues. She said;

“The law limits the much we can do. People are suffering, especially poor uneducated lesbian, bisexual and queer women who have nowhere to turn. If not for the law, we would be able to openly announce either on radio or television where they can seek for help of whatever kind. This am sure would’ve helped many in distress.

“Also, most Christians in Nigeria feel that lesbian, bisexual and transgender women are evil and demon possessed, linking it to the Sodom and Gomorrah story. And promoting this kind of information further reduces the self esteem of Lesbian, bisexual and transgender people. If not for these laws, we would be able to openly and publicly engage members of the society in dialogues, educating them with available facts.

Here’s a newsletter every Nigerian lesbian, bisexual and queer woman should read