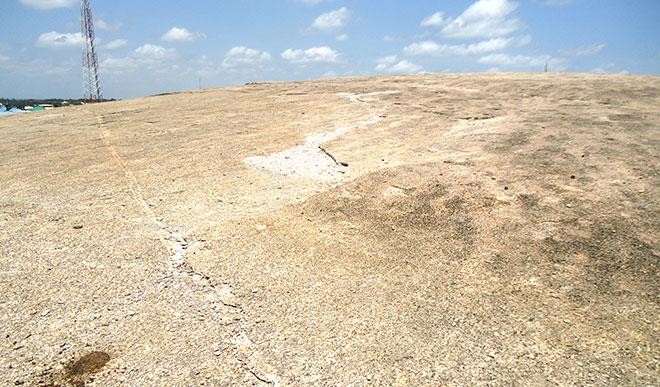 Photo of the cracked rock in Kaduna

Inhabitants of the Hayin Magina area of Ikara, in Kaduna State have ignorantly stated that a mini-earthquake witnessed there was caused by the “activities of prostitutes and homosexuals.”

According to Daily Trust, the earthquake, or tremor, caused a huge rock to crack and also hit a couple of houses hard. It woke sleeping residents who claim that it occurred around 10:43pm.

Many people panicked and abandoned their homes due to this.

A resident, Malam Mustapha Musa, blamed homosexuality saying “It’s nothing but a warning from Allah, the most high. Many heartless residents have made the rock a safe haven for raping our young boys. On many occasions, victims were found wounded by rapists around the rock. Parents of some of these boys are still battling to restore them. Those who cannot afford medical bills are suffering in silence,

“Allah is tired with what is happening in Ikara. Apart from the rape of innocent boys, there are many criminal activities taking place here. Most of the perpetrators are known, but it is like they are above the law.”

Another resident, Sani, whose house was affected by the quake, described the incident saying, “Actually, I have never witnessed something like that. When the quake started, my entire house was shaking. I thought that the world had come to an end. It is indeed something that one has to keep reflecting on because it is only Allah that is capable of shaking the earth like that,

“Another thing that made many of us to vacate our houses was that the quake reoccurred after about seven days. On the two occasions, the quake occurred in the night.”

The Sarkin Ikara, Alhaji Aliyu Suleiman, speaking to Daily Trust said that state government officials had visited the site. On associating the quake to sins committed in

He agreed with the notion that Allah could use such incidents to serve as warning. He however said that both traditional and government leaders are taking measures to bring the criminal acts to an end.

“We’ve put measures in place to ensure that anyone caught committing such sins will be made to regret it. One of the measures is to assign the youths to strip the criminal naked and take him round the town before being handed over to the authorities for further action. Those that are seen as leaders, or men of integrity, but engage in such acts, will be summoned and warned to desist. If they refuse, we will expose them. There will be no sacred cows.” He said.

A professor of Geography at the Ahmadu Bello University (ABU), Zaria, Ibrahim Musa Jaro, is of a different opinion stating that the earthquakes are usually caused by “compressional and tensional” forces.