This is a report on the year’s accomplishments of the St. Paul’s Foundation for International Reconciliation, a crucial supporter of the African Human Rights Media Network and a strong advocate for LGBTI rights internationally.

This is not a report on what LGBTI rights rights activists have accomplished this year (a lot!), but a report on the first year for the St. Paul’s Foundation’s new focus on supporting advocacy journalism that promotes recognition of the human rights of LGBTI people, especially in Africa.

(If you want to support this work financially, you could make a modest monthly donation via the DonorBox site, where donors keep control and can cancel at any point, or a one-time donation via Facebook, PayPal or check.)

The foundation’s work
St. Paul’s Foundation for International Reconciliation is working to create a world where all people are treated with respect and dignity without regard to their sexual orientation or gender identity. In particular, in countries with anti-LGBTI laws we help provide news articles and podcasts about LGBTI people’s struggle for recognition of their human rights.

The foundation’s vision
A world where all people are treated with respect and dignity and are guaranteed all human rights, without discrimination, stigma, harassment or repression on the basis of the sexual orientation, gender identity, or any other status.

The foundation’s mission
To support the publication and distribution of news articles,podcasts, videos, features and commentaries that educate readers, listeners and viewers about LGBTI people’s struggle for respect and recognition of their human rights.

I’m encouraged about what the St. Paul’s Foundation for International Reconciliation has accomplished in the past year and optimistic that we will be able to build on that in the coming year.

In April we launched the African Human Rights Media Network, with its central website at RightsAfrica.com.  The articles published on that website flow out to the websites of network members. The network is just getting started, with shared African and American leadership and a goal of expanding the role of African leaders. Currently it has four member organizations  — NoStringsNG, Erasing 76 Crimes, the St. Paul’s Foundation and the small Nigerian LGBT rights organization LIFFE — but among us we already have an extensive presence online, including Facebook, Tumblr, Twitter, Instagram, and an app for mobile phones. Counting those, we can say truly: “The African Human Rights Media Network reaches an audience of 10,593 on 17 sites — and we’re growing.”

Graphic for the fundraising campaign for the Not Alone / Pas Seul project in Yaoundé, Cameroon.

We also conducted a successful nutrition program at Yaoundé Central Prison in Cameroon. This Pas Seul / Not Alone project uses journalism to connect readers and financial supporters to the victims of homophobia who are serving time for homosexuality (and no other charges). In the first phase of the project, Cameroon reporter Steeves Winner wrote articles about the three gay prisoners in Yaoundé. We used those articles to encourage readers to donate money to buy food for them, Steeves arranged with local LGBTI rights groups to deliver the food, and he and a member of a local Pas Seul / Not Alone advisory committee followed up at the prison to make sure that the food was received. A total of $566 was donated for the three prisoners’ food between July and September. All three prisoners were released on schedule before the end of September.

The media network and the prison nutrition program are in addition to the regular monthly support that has gone to LGBT rights journalism in Nigeria and Cameroon, which allows regular coverage of LGBT human rights challenges those countries face. That coverage is published through the African Human Rights Media Network, including the Erasing 76 Crimes blog, and in 76 Crimes en français. 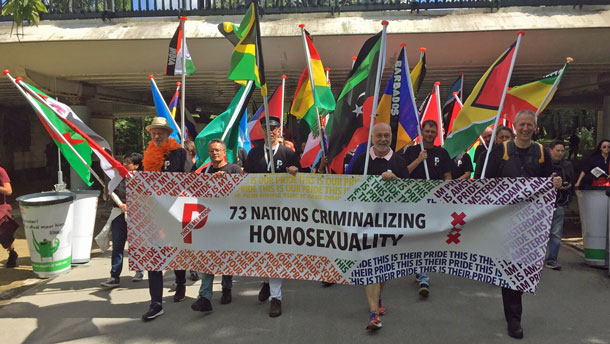 Protesters at Pride Walk carried flags of 73 nations with anti-homosexuality laws. The Erasing 76 Crimes blog helped to identify those countries and gay-rights activists who deserved recognition for their work there. (Photo courtesy of Pride Walk)

We helped with preparations for July’s Pride Walk in Amsterdam, which focused attention on victims of the anti-LGBT repression in 73+ countries with anti-LGBT laws.

We hope to boost both readership and membership in the network. An experienced social media manager in Nigeria is working on expanding the reach of the RightsAfrica.com page on Facebook. That page had only few followers at the start of this month. It now has more than 1,700 and that number will surely grow in 2019.

Graphic for the fundraising campaign for the new Not Alone / Pas Seul project in northern Cameroon.

A second phase of the Pas Seul / Not Alone project is under way, this time in Muslim-majority northern Cameroon. We are partnering with the LGBTI rights group Jeunes Solidaires, which will deliver the food to three prisoners at two prisons in that area. A human rights attorney in northern Cameroon will conduct follow-up visits for verification. In October, Steeves made a fact-finding trip to north Cameroon, visited the prisoners and made arrangements with Jeunes Solidaires. We have published articles about each of the three prisoners (Ismael, Abdelaziz, and Ibrahim) and appealed for donatios to the project. So far, readers have donated enough money for only one delivery of food; we hope to receive more financial support in 2019. Two of those prisoners are serving six-year sentences just for whom they love. Without your help, they will continue being fed one small portion of nasty food per day through 2021. Please donate by DonorBox, Facebook, PayPal or check.

We discussed this possibility with Caribbean activists earlier this year. They were interested in considering a network similar in structure to the African Human Rights Media Network, but had too many ongoing projects to allow time to consider it in any detail. We’ll get back in touch early in 2019 to discuss what’s feasible.

Will gay Nigerians ever be free to openly live their authentic lives?