GA. Man Poured Boiling Water Over Gay Couple As They Lay In Bed

Marquez Tolbert buried his face in his hands. His chest contracted with a stifled sob.

Anthony Gooden was hospitalized for five weeks undergoing treatment for burns. The photo on the right shows him before the alleged attack. (Diyawn Jackson via GoFundMe)

When he looked up, a patchwork of angry red welts became visible on the side of his neck. That’s where he was burned. His T-shirt hid the full extent of his injuries, the swath of scalded skin that now covers his entire back.

“The pain,” he told WSBTV Thursday, his voice cracking on each syllable. “You can’t sleep at night.”

Tears were in the young man’s eyes. He winced, wiped his cheeks with the back of his hand, then took a sharp breath, summoning the words and the composure to go on.

“The pain doesn’t let you sleep,” he continued. “It’s excruciating, 24 hours a day. It doesn’t go anywhere, it doesn’t dial down. It’s just there.”

A month ago, Tolbert, 21, and his boyfriend Anthony Gooden Jr., 23, were jolted out of sleep by the feeling of boiling water splashing across their torsos, faces and limbs. Gooden’s mother’s boyfriend, Martin Blackwell, stood over them, pouring the water, they say.

For a moment, Tolbert had no idea what could have provoked the alleged attack. Then Blackwell allegedly yanked him off the mattress and yelled, “Get out of my house with all that gay,” Tolbert recalled to WSBTV.

“We were just burning,” he later told Project Q Atlanta. “My body was just stinging. It was like a really, really severe kind of stinging. I could hardly think straight.”

Georgia has had no hate crime statute since the state’s supreme court struck down the law in 2004. But WSBTV reported that Blackwell could face federal hate crime charges for the alleged attack.

Marquez told the TV station he has no doubt that hate was what fueled this. 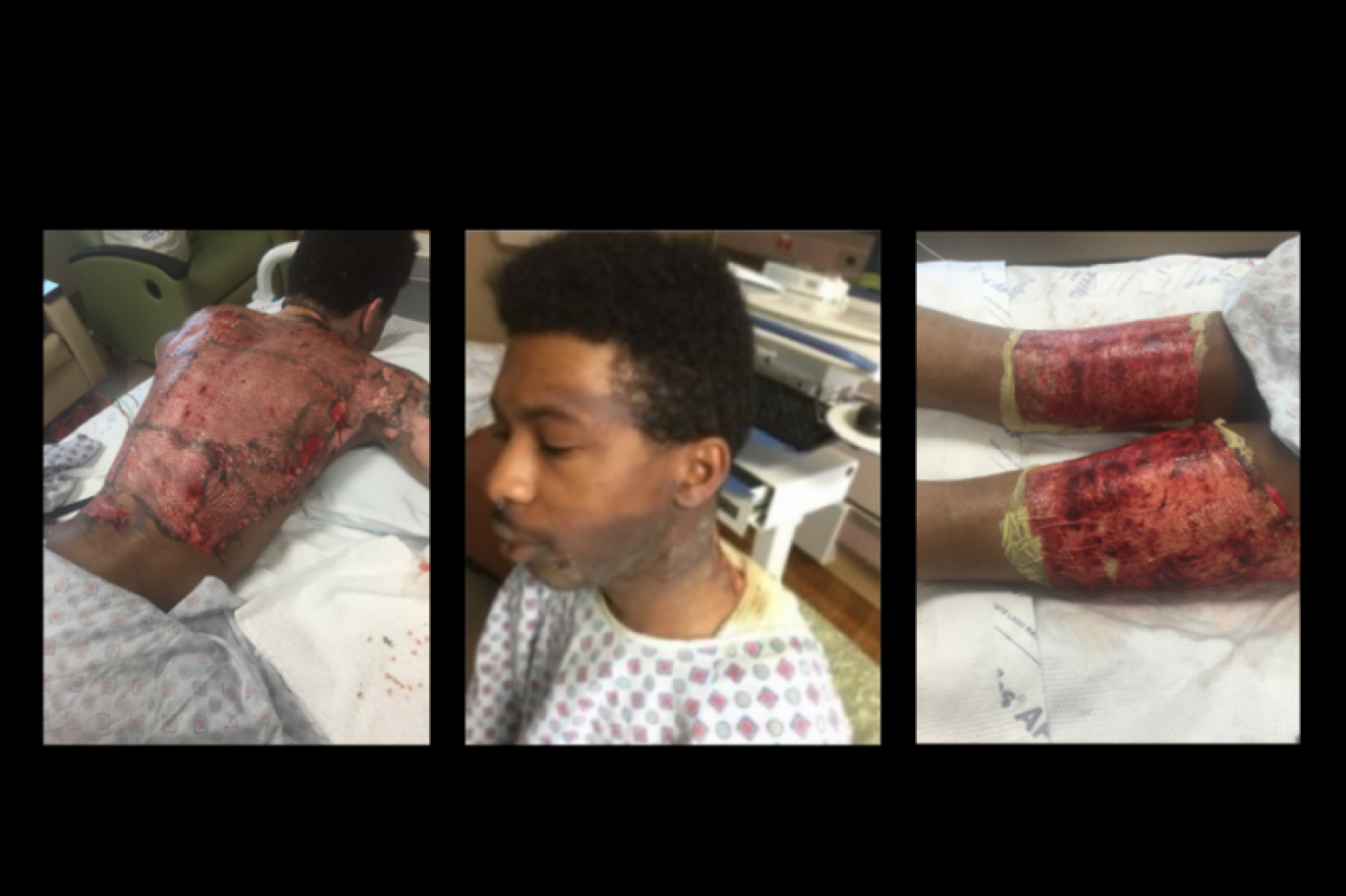 Anthony Gooden was hospitalized for five weeks undergoing treatment for burns. The photo on the right shows him before the alleged attack. (Diyawn Jackson via GoFundMe)

“Why else would you pour boiling water on somebody?” he asked.

Now, Tolbert and Gooden are in the agonizing process of recovering from their second and third degree burns. Tolbert spent 10 days in the hospital undergoing surgery to repair the skin on his back. Gooden was hospitalized for five weeks, according to Project Q Atlanta.

The Georgia couple had been dating for about six weeks, they told the LGBT news site. They both worked at a warehouse near Gooden’s mother’s College Park apartment, and often slept there when they got off their shift.

On Feb. 12, after working for 12 hours, they collapsed onto a mattress in the living room. Not long after, Blackwell — who didn’t live in the apartment — allegedly walked in.

According to an incident report from the College Park Police Department, Blackwell told police that he was angry at the sight of the two men together.

“They were stuck together like two hot dogs … so I poured a little hot water on them and help them out,” he said to police, according to the incident report. “… They’ll be alright. It was just a little hot water.”

Blackwell claimed the two men were having sex when he poured water on them. Vickie Gray, a friend of Tolbert’s, said that’s not true; they were asleep after a long day of work — not that the alleged attack would have been justified in any case, she noted.

Blackwell then threw them out of the apartment, Gray said. They went door to door looking for someone to help them — the tenants of the first apartment their approached would not let them in.

Eventually, the couple found friends who let them use their phone to call 911, according to the police report.

Though the incident happened more than a month ago, the couple only decided to go public with their story this week, after Gooden was released from the hospital.

Gray has set up a GoFundMe account to help raise funds to pay Tolbert’s medical bills. The 21-year-old must now wear compression garments 23 hours a day for the next two years, she wrote in an email to The Washington Post, and is attending weekly counseling and physical therapy sessions to deal with his emotional and physical scars. It’s difficult for him to go outside, because sunlight exacerbates the pain of his burns.

Gooden, who was burned even more severely, was in a medically-induced coma for several weeks, she said. According to his GoFundMe page, more than 60 percent of his body was burned, and he had to undergo skin graft surgery to repair damage to his face, neck, back, arms, chest and head.

According to WSBTV, the couple said Blackwell had made them uneasy before, asking if they’d ever been intimate. But they never thought he might hurt them.

Still, both men’s families said they’d feared something like this might happen ever since Gooden and Tolbert came out. Gray wrote that Tolbert’s mother, Jaya Tolbert, confessed that her greatest fear was that her son would be attacked for his sexuality.

“It’s a shame that our society places that kind of fear in a parent’s heart,” she said. “It gives you a feeling of helplessness, and when it actually occurs, you lose hope.”

Diyawn Jackson, a cousin of Gooden, wrote that he had the same worries.

“But never did we think it would happen in the very place he is suppose to be safe,” he said on the GoFundMe page, “at his own home by someone he trusted.”

“It’s so hard for me to look at my cousin,” Jackson continued. “… Before this tragedy he was so independent, happy, outgoing and charismatic. He was always the life of the party, and was there to help everyone. Now, as I sit and watch him cry and have mental breakdowns, asking if there is anything he could have done differently, [it] just tears my heart apart. This should NEVER happen to anyone.”

The crowdfunding pages for the two men have raised a combined $35,000 so far, and Atlanta’s LGBT community has arranged a fundraiser for them at a local sports bar.

“It gives you that feeling that not everybody in the world is bad,” Tolbert told Project Q. “I am just glad there are people out there that care enough that they want to help.”

The 21-year-old is still recovering, but he said the attack has changed his plans for his life. He wants to go back to school, he said, maybe get a medical degree, or pursue some sort of public speaking. He hopes to do something for people who have been in similar situations.

“This incident has opened a couple of doors in my head for me,” he said. “… I feel I could help somebody.”