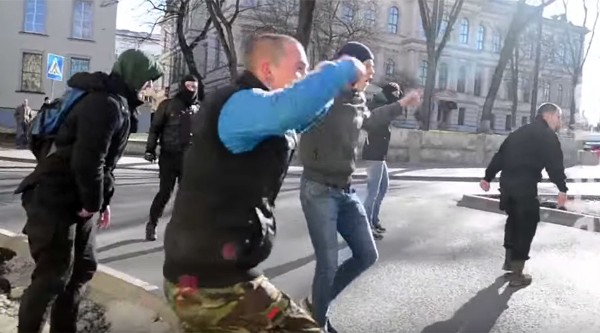 Ukrainian riot police proved to be somewhat useless against a crowd of ultra-nationalists in the city of Lvov, as they failed to protect an LGBT gathering from harassment and did not arrest a single suspect after retreating from the confrontation with attackers.

Amid a court ban on public Lesbian, Gay, Bisexual, and Transgender (LGBT) events in the city of Lvov, minority activists decided to organize a private gathering in the Dnestr hotel, where a few dozen people arrived to take part in an “Equality Festival.”

The organizers placed private security at the entrance to the conference hall where the festival, which close to 200 people registered to attend, was about to begin. In addition local police units reinforced the security for the closed door festival, the highlight of which was a poster exhibition dedicated to women and minority rights.

But the event never took place, as a crowd of ultra nationalist youth, few covering their faces with balaclavas, slowly but surely surrounded the Dnestr hotel demanding that authorities stop the event.

“We are blocked at the hotel,” organizer Olena Shevchenko said on Facebook from the hotel. “Police don’t want to react, they are saying all those people in masks just meet their friends here.”

More police reinforcements were deployed at the hotel with authorities having forcefully canceled the event. Police later explained that they had received an anonymous bomb threat. Bomb squad units were sent to the hotel to search for the hoax explosives, while the attendees were escorted out.

As the participants of the event were being boarded into buses by the officers, the ultra-nationalist group started throwing stones and firecrackers at the attendees and attempted to break through the police lines and shouting “Kill! Kill! Kill!”

Police tried to quell the mob and even chased them into a nearby park, where the attackers regrouped and began pelting stones at the police while shouting SS slogans, repeating “SS” and “Hitler Youth.”

Various radical groups in Ukraine have enjoyed a kind of a special treatment in Ukraine for at least two years so far with law enforcement often turning a blind eye to their crimes. Shevchenko wrote on Facebook that it is “dangerous” to live in Lvov, where various “extremists” can dictate whatever they want to whomever they want.

What the LGBT community found most shocking is that police failed to arrest a single attacker. Instead, according to local media, the authorities opted to hold a series of “informative discussions” with the youth, none of whom officially belonged to an organized party.

Despite the tense incident Shevchenko says the LGBT community will continue to fight for the “freedom and equality of all people.”

“Because today they hunt us, and tomorrow they will hunt others. There are no guarantees you won’t fall into the next group of ‘abnormals’ or ‘unnaturals’,” Shevchenko wrote. “It is necessary to stand up to this mayhem and lawlessness now.”

Despite regular attacks on minorities, officially authorities in Kiev pledge their support and advocate the LGBT rights as part of the EU requirement for Ukraine to move forward in its application for visa-free travel to the Schengen area.

Last November the Ukrainian parliament approved an anti-discrimination law banning sexual orientation discrimination at work. A few weeks later the government also approved the action plan to implement the National Strategy on human rights for the period until 2020. That includes a promise to draft a bill on registered partnership for same-sex couples by 2017.

The events in Lvov sparked condemnation which however focused on deplorably widespread displays of intolerance in the Ukrainian society, rather than an obvious failure to bring radical youth under control by the authorities. US ambassador in Ukraine Geoffrey Pyat, for instance condemned what happened next to the Dnestr hotel, saying that such acts discredit Ukraine and cast doubt on the prospects of its “European future.”

“Bad news that Lviv Equality Festival was unable to proceed due to violent counter protests,” Pyatt wrote on Twitter. “Displays of intolerance in Lviv at odds with the European future so many Ukrainians have sacrificed for.”