NoStringsNG connected with Daniel Ekine, a queer Nigerian who now lives in the United States after gaining asylum. 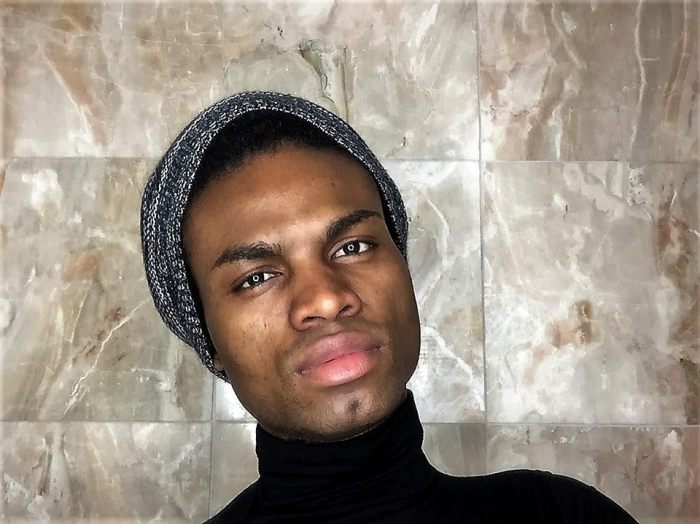 They told their story about how they were rejected and abandoned by their father at age 5, and how their mother tried so hard to change them because she felt they were cursed. Ekine was sexually abused several times and almost got pushed off the bridge in Nigeria by those who hated their very nature.

Please tell us about yourself, growing up in Nigeria and what you do?

Hi, my name is Daniel Ekine. I was born a biological male but I am a gender-queer by gender, meaning I identify as both.

My full name is Ibifubara Daniel George Ekine and I went by I.B. But that may be changing if I become a US citizen soon.

I am the eldest of 4 and the only male child. I was raised by a single mother and my biological father left when I was 5 because he hated my existence since I was 1.

My first 5 formative years were spent in India before I was brought to Nigeria. Back in India, I was considered the third gender but my mother assumed it was a phase. My father hated me so much that he beat me all the time. The scars were so severe from being beaten up mercilessly by him, that I had to grow out my hair after college. I was tired of the questions from people, it always took me to a dark place of having a horrible childhood, being burnt with hot water and forced up my anal region, stripped naked on the streets of Port Harcourt and flogged to get the demon out of me.

While growing up in Nigeria, in an attempt to change me, my mother and her gang of family continued from where my father stopped. They would beat me all the time, but when she saw that the beating wasn’t working, she then tried so hard to indoctrinate me to feel guilty about who I am. I was raised a Jehovah’s Witness and forced to baptized at 12.

She always felt and believed God cursed her womb the day she gave birth to me and that’s why I turned out different. So that’s why I refer to myself as ‘The Black Rainbow or ‘The Beautiful Abomination’.

I was called ANUS, Alien, faggot, bastard and the list is endless as well as sexually abused many times and almost pushed off a bridge because they hated my existence.  I attempted suicide 3 times.

At some point, I had to own up to all those names, and somehow I grew to love myself even more and that’s why I have the quote, ‘one atom of love is equal to a million hate and every problem has an expiration’

Currently, I have a Bachelors degree in Electrical/electronic engineering from a full scholarship but when I got to the states I was told I had no citizenship or 10 years experience so I resorted to cleaning houses, writing novels, working in construction and flipping burgers and after years of struggle I took a loan and went to school as a stylist here in the states. And now I am a licensed stylist with my own salon and trying to make it work. There is a lot of discrimination and conservative segregation but I am not letting that stop me so I work ten times harder and keep my chin up.

Please tell us, at what age did you migrate to the U.S. and what prompted you to leave, was it in any way related to your sexuality?

I knew I didn’t belong since I was 7 or 8. I definitely left because of my sexuality and education. I got a full scholarship to study elect/elect engineering after 7 years of struggling to get into college back home in Nigeria. My mother never really wanted that because she felt that I won’t be with them in other for her to continue to cure me. So when I got the scholarship I told no one until 6 hours before my flight and I told them.  They already knew I was never coming back but they said I could send them money because they would appreciate that than seeing me in the flesh. I left when I was 21 but finished high school when I was 15 back home.

Do you miss your country Nigeria, and do you think that if the country’s anti-same marriage law is repealed, you will return back to Nigeria?

I was always considered the alien, foreigner, the misfit. I don’t even know how to do pricing at the markets and was called JJC all the time. I do miss yam and pepper soup. I wouldn’t be able to visit even if I could. I claimed asylum and I have left for a very long time.

So, what is your opinion on Nigeria’s anti-same-sex marriage law?

It’s the most inhumane and barbaric law ever passed for a progressive country like Nigeria. I was actually granted asylum the year the law passed after waiting 3 years. When that law passed I knew my options of visiting even for a week or a day was out the window.

Some people say homosexuality is a learned behavior, what can you say to people with this sort of thinking?

People fear what they don’t know. I was born this way and there was no closet to hide. After all the inhumane torture and barbaric abuse I suffered, I am still the same and even more in touch with myself. Never learned to like boys, I just was attracted to them like my DNA wanted. Never felt anything was wrong and religion made me felt like I was never meant to exist. But here I am, a beautiful abomination.

What is, or are your general advice to LGBT persons who are struggling with their sexuality in Nigeria?

My advice is for them to be true to themselves and be brave always. It’s tough and this world may be dark but we as an LGBT community reflect love and light and we just have to keep sharing love always. Kill them with kindness and stay proud. I always say “every problem has expiration” and “one atom of love is equal to a million hate”