The Botswana government has announced that it has deported U.S homophobic pastor Steven Anderson who was recently banned from South Africa over his anti-gay comments. 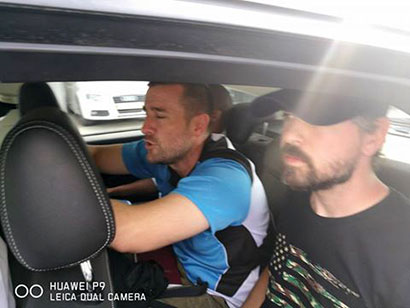 Anderson who had been put on a visa watch-list by the Botswana government, quickly entered Botswana on Thursday from Ethiopia before all border posts were fully alerted.

But things went bad for him when he said that gays and lesbians should be killed during an interview with Gabzfm, a local radio station at the country’s capital Gaborone, on Tuesday.

He also called for pedophiles and adulterers to be killed and said the Bible barred women from preaching in church.

This caught the attention of the country’s President, Ian Khama who then immediately ordered for his arrest and deportation. He told Reuters;

“He was picked up at the radio station. I said they should pick him up and show him out of the country,” Khama said in an interview. “We don’t want hate speech in this country. Let him do it in his own country.”

This the Botswana government confirmed in a tweet below.

However, Anderson denied he was being deported. He said;

“I am not being arrested. I am leaving Botswana voluntarily,” he told witnesses at the radio station, adding in the local Setswana language that he loved Botswana very much.

Anderson, who is a pastor of the Faithful Word Baptist Church in Arizona, had supported the Orlando night club shooting in Florida by saying “there’s 50 less pedophiles in this world”.

We at NoStrings will keep an eye on him, as he may probably want to enter Nigeria to spread his hate messages.