Congratulations! LGBT Organization In Botswana Gets Go-Ahead To Register Officially! 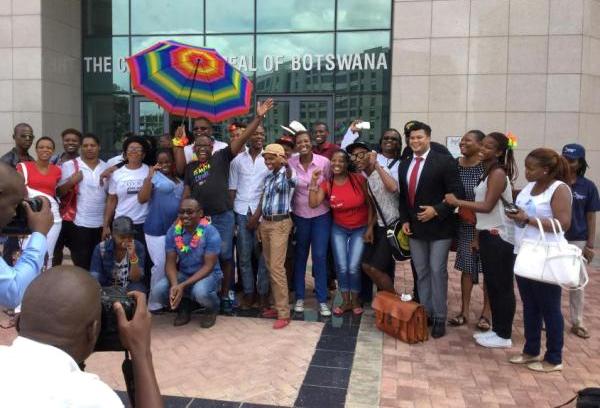 On 16 March 2016, a full bench of the Court of Appeal of Botswana delivered a significant judgment in the case of Attorney General v Thuto Rammoge and 19 Others upholding the decision of the High Court and ordering the Botswana government to register the organisation Lesbians, Gays and Bisexuals of Botswana (LEGABIBO) as a society in terms of the Societies Act. Whilst activists gathered at the Court of Appeal in Gaborone to hear the judgment, activists from throughout SADC posted messages of support on social media.

In 2012, LEGABIBO, which had been coordinated from within the Botswana Network on Ethics, Law and HIV/ AIDS (BONELA), applied but were refused registration as a society by the Director of the Department of Civil and National Registration and subsequently the Minister of Labour and Home Affairs. The government’s position was that lesbian, gay and bisexual persons’ rights were not recognised by the Constitution and the objectives of LEGABIBO were incompatible with peace, welfare and good order in Botswana.

Thuto Rammoge and other activists, with technical and legal support from the Southern Africa Litigation Centre (SALC), the Open Society Initiative of Southern Africa (OSISA) and BONELA, took the government of Botswana to the High Court seeking a review of the decision to refuse registration. They argued that the decision was irrational and in violation of their constitutional rights to equal protection of the law, freedom of association and freedom of expression. The activists obtained a successful judgment in the High Court in November 2014, but the State appealed the decision.

The Court of Appeal reaffirmed that the refusal to register LEGABIBO was both irrational and in violation of the right to freedom of association. In an important judgment for the LGBTI community, the Court emphasised that there is no legislation in Botswana which prohibits anyone from being homosexual. The Court went further to hold that the objectives of LEGABIBO, which include promoting the human rights of LGBTI persons and advocating for law reform, were not unlawful. Importantly, the Court of Appeal emphasised that fundamental rights are to be enjoyed by every person and to deny this, is denying an individual’s human dignity.

Caine Youngman, LEGABIBO Advocacy and Awareness officer, has been a part of the registration process from the beginning and said that, “The win gives us hope, faith and belief in Botswana’s legal system. It has been a very long and exhausting 11 years since we first started the journey to have our organisation registered.”

“This judgment is one of the many occurrences in Botswana where democracy has come to play, the courts are protecting minority rights and giving a voice to the LGBTI community” said Anna Mmolai-Chalmers, LEGABIBO Coordinator at BONELA.

BONELA’s Executive Director, Cindy Kelemi said, “there is a lot that still has to be done to ensure promotion and protection of the human rights of the LGBTI persons and Parliament as the legislative arm of government is responsible for making laws which will protect LGBTI persons from discrimination, stigma and abuse.”

“The judgment emphasises the importance of the fundamental right of individuals to freely associate,” said Tashwill Esterhuizen, SALC’s Sexual Minority Rights programme lawyer. “The ability to share opinions in a collective manner and to campaign for human rights is important and all governments have a duty to protect the right to freedom of association.”

The activists were represented by Attorney Dick Bayford, from Bayford and Associates, and Lesego Nchunga, from Dow and Associates.