Women in Africa are marrying each other based on local tradition 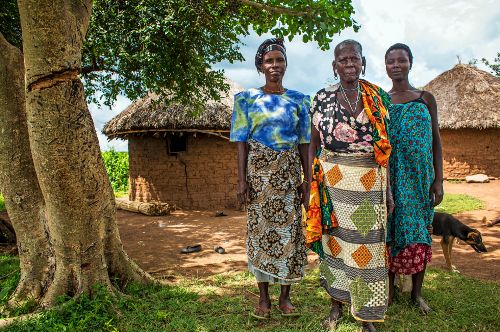 Isombe, Veronica Nyagochera, and Mukosa pose for a family portrait outside their home. Charlie Shoemaker

Some of the women of Tanzania’s Kurya tribe engage in same-sex marriages, and they do this under a local tradition called nyumba ntobhu (house of women).

According to a Marie Claire piece, the tradition allows older women of the tribe to reclaim their freedom and right to own property by marrying younger women, as by Kurya tribal law, only men can inherit property, but under this tradition, a woman without sons, widowed or is allowed to marry a younger woman who can take a male lover and give birth to heirs on her behalf.

Even though this is clearly a same-sex union, these women are not expected to be romantically or sexually involved, but rather, it’s a win-win situation, as the arrangement comes with some benefits like: a stable home, ability to choose their own male sexual partners – if they choose to, the reduction of domestic abuse, child marriage, and female genital mutilation.

Paulina Mukosa, a younger woman who is in a polygamous same-sex marriage with two women says the arrangement was just right for her.

“I understood that I had to give birth, but I wanted children anyway, so it was my choice as well. There is no choice if you marry a man—as well as giving him children, you must also have sex with him whenever he wants, or he will beat you for being a bad wife.” Mukosa also has a boyfriend. “So far he has treated me beautifully,” she says. “But I can easily break up with him if that changes.”

Not like it is important to them anyway, but these marriages are not recognized by the Tanzanian government.

Now, this is not new, as there are traces of similar practices even in different parts of Nigeria. Diana Abasi Ibanga, a Nigerian researcher revealed this when he spoke on a television interview. He said.

“I found out through my research, that in my community/tribe – Anang, that is in Akwa Ibom State. You have women, who were always in closet with a fellow woman, they call them husbands/Ebe, that is a woman calling a fellow woman husband. now this people can be in closet for hours. They won’t allow other people to penetrate. And they’ll be keeping friendships between themselves. And now we don’t know what happens in those closets”

This practice indeed does prove that even though Africa screams and claims that same-sex marriage is not an African thing, same-sex marriages has always been a core part of our many diverse cultures.

See below a video showing the nyumba ntobhu tradition.

What do you have to say about this? Leave your comments below.