Read below an interview with Nigerian born human rights activist.

Unoma Azuah is a prolific author and writing teacher at the Illinois Institute of Art, Chicago. Her research and activism focuses on LGBTQI rights in Nigeria, and has recently published a book on the lives of gay Nigerians, Blessed Body: Secret Lives of LGBT Nigerians. 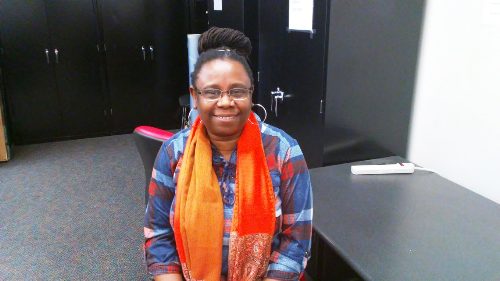 Azuah is the first Nigerian to give LGBTQI issues consistent visibility in the Nigerian literary scholarship. She left Nigeria in 1999, after receiving numerous threats to her life on account of her work, and now splits her time between the US and Nigeria to continue assisting and working with the Nigerian LGBTQI community.

Attitude caught up with the ground-breaking author in a year which saw her nominated for the Kaleidoscope Trust’s David Kato Award.

Tell us a bit about your work over the last year.

This year I started some research on how documentaries can be used as a tool of advocacy to  fight homophobia in Africa, especially with the recent release of documentaries like “The Veil of Silence,” “Born This Way,” and “Hell or High Waters.”  Because movies/documentaries stir people’s interest more, they stimulate curiosity and interest, then engage people’s attention for a longer span of time. In that way, the experience of accepting a story is made more real and more active.  People forget many things easily, but a visual experience can make sure ideas and concepts are permanently etched in their minds.

Additionally, the most ambitious work I have done in the last year is collaborating with Queer Alliance, a Nigerian based human rights, health advocacy and support group for the LGBTQI community, to do the ground work on collecting Lesbian, Gay, Bisexual, and Transgender true life stories. It involved interviewing, gathering, editing and publishing Blessed Body: the secret lives of the Nigerian LGBT community.  The project was inspired by the appalling fact that on the 7th of January, 2014, the Nigerian government passed a law that approved state-sanctioned homophobia. Since then, Nigeria’s LGBTQI population has lived in terror with little to none-existent self-dignity.  I believe that these narratives can change the way we are perceived. The intent of the book as well is to give a firsthand insight into the plight of the LGBTQI Nigerians and ultimately inspire calls for constitutional and policy reforms that protect the fundamental human rights of this marginalized community.

Has your work endangered you?

My work has gotten me death threats, stigmatization, hate mail and often when people recognize me in public they insult me and tell me that I am a disgrace to my family and my country. I have attended conferences where Nigerian academicians called me an embarrassment.  What I represent as a sexual minority attracts danger like a magnet, especially in a country like Nigeria where more than ninety percent of its population is homophobic. Also, as a lesbian in a hyper religious and a patriarchal country like Nigerian, I am reminded of what Dr. Chimaroke O. Izugbara, said: “Homosexuality is one of the strongest challenges to patriarchy,” and therefore “is framed as an unruly force which threatens humanity at large and has to be kept perfectly under control, by violence, if necessary.” Either way, it does not deter me. I will keep fighting for LGBTQI rights till I draw my last breath.

Considering your focus on LGBTQI issues, how difficult is it to get published in Nigeria?

Difficult is an understatement. There are no known publishing houses in Nigerian that cater to LGBTQI themed works. I don’t know of any that would seek, support, encourage an LGBTQI themed work, talk more of publishing such.  Even newspapers in Nigeria have policies against LGBTQI topics. For those that do feature homosexual subjects, their agenda is simply to sensationalize LGBTQI matters so that LGBTQI people attract more hate and disgust. Therefore, their plan is to incite more violence against the LGBTQI community in Nigeria. The hostility geared toward LGBTQI publications is one of the reasons why I started the publishing firm, Cookingpotbooks in the United States.

How has the response from the public been to your work?

It has been quite impressive. Many from the community have reached out to express their appreciation for an outlet, and for the possibility of claiming their voice. So a good number have reached out to say thank you for the platform that offers them visibility and a voice.

Are you seeing support growing for LGBTQI issues?

I think a lot of awareness is being created in Nigeria on issues LGBT. There has been a tremendous increase in the number of bloggers giving attention to LGBTQI concerns in Nigeria; there are blogs like Kito Dairies and platforms like NoStrings that push the LGBTQI topic out there to give a positive orientation about LGBTQI people and their lives.

How important is art in the fight for equality and human rights? Is it often overlooked?

A multiplicity of mediums especially in the area of visual and creative art is important. These mediums give direct messages. They are immediate and are easily consumed. I agree with Sam Kauffman, a professor of film in Boston University, when he says that “…the job of documentary filmmakers…is to shed some light on a neglected people or issue.” So, yes, the art should be in the forefront as an arsenal for educating and re-educating on LGBTQI topics. One of the most popular creative outlets for Nigerians is the Nigerian movie industry known as Nollywood. Nonetheless, when this industry engages the LGBTQI premise, it’s always from an extreme dimension.  Hence, the topic is either overlooked or even when it is considered, the LGBTQI plot is demonized. Therefore, we need to start telling our own stories; it’s urgent that we start re-“righting” our narratives.

Why do you think academia remains silent on LGBTQI issues?

Most Nigerian academicians are afraid of the backlash. They fear being humiliated or labelled as supporting LGBTQI rights. They fear the repercussion that they would be perceived as rebelling against their culture and religion. Sadly, the impression is that homosexuality is imported, therefore it’s UnAfrican. However, sexuality is a human phenomenon. It is not restricted to particular races or people. Besides, before sodomy laws were introduced by colonialists, non-heterosexual practices certainly existed in Africa—among the Nilotico Langa men in Uganda, for instance, in the Azande community of northern Congo, and among the Dan Daudu in northern Nigeria.  And of course, single-sex relationships existed in south eastern Nigeria as Ifi Amadiume explored in her book Male Daughters, Female Husbands. Most, if not every major institution in Nigeria is silent about the LGBTQI issue. It is a taboo subject. I remember how the room for the presentation of my paper “The Emerging Lesbian Voice in the Nigerian Feminist Literature,” was basically overrun when it was first presented in Germany. So, the hostility spills over from religious to legislative to education·

I have a number of projects for 2017. Some of them include researching and contributing to a forthcoming publication of a world encyclopaedia about LGBTQI issues. I will be contributing the entry for Nigeria. In addition, I will continue work on researching and reviewing African LGBTQI documentaries and then starting volume two of Blessed Body: The Secret Lives of the Nigerian LGBTQI Community.

The David Kato Vision and Voice Award is coordinated by the Kaleidoscope Trust, a London-based charity which partners with local LGBTQI rights organisations and activists in low and middle income countries to advocate the rights of individuals who suffer for their gender identity or sexual orientation. The Trust is a co-founder of The Commonwealth Equality Network, the first group to campaign for LGBTQI rights within the Commonwealth diplomatic community and institutions.

The award is presented every year in memory of Ugandan LGBTQI campaigner David Kato, who was murdered in 2011 after a local newspaper published his photo in a feature calling for gay men to be executed. The 2017 winner – Caleb Orozco – will be presented with his award in a ceremony at the annual fundraising gala dinner of the Kaleidoscope Trust on January 26th.