The findings of the first scientific, nationally representative survey of attitudes towards homosexuality and gender non-conformity in South Africa have just been released by the Other Foundation. 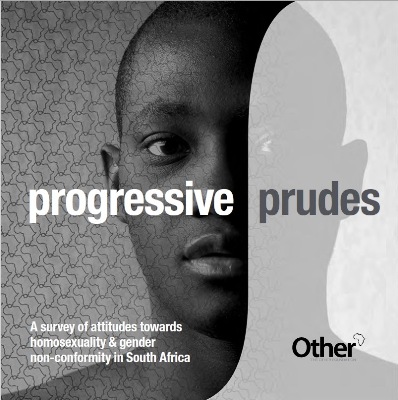 The survey, commissioned by the Other Foundation and undertaken by the Human Sciences Research Council (HSRC) as part of the 2015 South African Social Attitudes Survey, asked 3000 adults across the country about their views and behaviour regarding a wide range of gender identity and sexual orientation issues. The report on the survey, Progressive Prudes, a survey of attitudes towards homosexuality & gender non-conformity in South Africa, provides facts and figures on a larger scale than previously available.

The findings reflect the contradictions between the country’s progressive laws and conservative views, and offer new insights. They reveal that 51% of South Africans believe that gay people should have the same rights as everyone else. Slightly more than that would ‘accept’ a gay family member, even though 72% think that homosexuality is ‘morally wrong’.

The research found that ‘moderately religious’ South Africans were the most tolerant of gay and lesbian people, and moderately and highly religious people were less likely than the general population to keep away from gay and lesbian people. Most South Africans supported keeping the current Constitutional protections against discrimination on the grounds of sexual orientation. The survey shows a tenfold increase in the number of South Africans who ‘strongly agree’ with allowing same-sex marriage and a decline by more than half in the number who ‘strongly disagree’ with this.

The findings indicate that 530 000 men and women, across all population groups, age groups and in rural and urban settings, self-identify as homosexual, bisexual or gender-non-conforming. More than six times as many – some 430 000 men and 2.8 million women – dress and act in a gender non-conforming way in public. Does this mean that it is safe to come out in South Africa, or to be seen as gay, considering the numbers of hate crimes one hears of against LGBTI individuals? The survey asked whether people had physically hurt, or would consider hurting gender non-conforming women. 90% said they had not and would never do so. However, 1% said they had and the researchers draw the disturbing conclusion that 450 000 South Africans had physically harmed women who they judged ‘dress and behave like men in public’ in the 12 months before the survey. Further, about 3 million South Africans would consider committing acts of violence against gender non-conforming people in future.

The survey is an important resource for organizations working to combat stigma and discrimination in Africa.

To give African researchers who live and work on the continent the opportunity to explore the data first, the Other Foundation has embargoed the data from the survey, beyond the Progressive Prudes report, for 12 months. The Foundation is offering limited research funds to support selected areas of interest that strengthen and support activism and is inviting institutions and individuals interested in accessing the data to apply.