…Jesus affirmed that many others like this gay centurion — those who come from beyond the assumed boundaries of God’s grace — are going to be admitted into the kingdom of heaven. And he also warned that many who think themselves the most likely to be admitted will be left out. Now, to all homophobic Nigerian Christians, whose example would you rather follow? 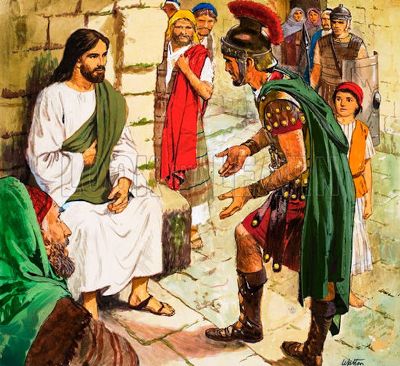 Men who came to Jesus: The Roman Soldier. Original artwork for illustration on p9 of Treasure issue no 249. Lent for scanning by The Gallery of Illustration.

When the debate about same-sex marriage first came to the open around 2014, taking into cognisance our extreme religiosity as a people, a few questions came to my mind. If Jesus Christ were the pastor of a major church today, would he turn a homosexual couple away from attending a service? Considering that while he was on earth he made friends with people considered to be the dredge of society – a list that may have included homosexual men – is it right for us today to discriminate against homosexuals or even make law that criminalises committed consensual same-sex relationships?

It’s one thing to discriminate against homosexuals because we feel repulsed by their preferences, but isn’t it another thing entirely to do so on cultural and religious grounds? I say this because I am of the opinion that it appears Jesus condoned homosexual relationships from an episode in the gospel.

From our days in Sunday school, many of us are familiar with the story recorded in Matthew 8:5-13 and Luke 7:1-10. There we are told that a Roman centurion came to Jesus to plead for the healing of his servant. Jesus said he was willing to come to the centurion’s house, but the centurion said there was no need for Jesus to do so. He believed that if Jesus simply spoke the word, his servant would be remotely healed back in the house. Marvelling at the man’s faith, Jesus pronounced the servant healed.

Now, this is not just another miracle story. Like a number of stories in the Holy Bible, this is a unique story that deserves careful examination for a good number of reasons. According to experts, in the original language, the Greek word used in Matthew’s account is ‘pais’. In the language of the time, ‘pais’ had three possible meanings depending upon the context in which it was used. It could mean “son or boy;” it could mean “servant,” or it could also mean a particular type of servant, for example one who was “his master’s male lover.”

Now, to my Christian brothers who are calling for the heads of queer people and are quick to simply declare by fiat that the Gospel could not possibly have used the term ‘pais’ in the sense of a male lover, I say you are all yielding to prejudice. We must look in-between the lines and let the Holy Bible speak for itself on this matter, even if it leads us to an uncomfortable conclusion. Is it possible the ‘pais’ referred to in Matthew 8 and Luke 7 was the Roman centurion’s male lover? To answer this question, let’s take another look at the biblical evidence.

In the Luke passage, several additional Greek words are used to describe the sick servant. Luke says this ‘pais’ was the centurion’s ‘entimos doulos’. The word ‘doulos’ is a generic term for slave, and was never used in ancient Greek to describe a son or boy. Thus, Luke’s account rules out the possibility the sick person was the centurion’s son. His use of the word ‘doulos’ makes this fact clear that this was a slave. In fact, Luke also takes care to indicate that this was no ordinary slave. The word ‘entimos’ means “honoured.” This was an “honoured slave” – entimos doulos – who was his master’s ‘pais’ – servant. Taken together, the three Greek words preclude the possibility the sick person was either the centurion’s son or an ordinary slave, leaving only one viable option — his master’s male lover.

The extraordinary lengths to which this man went to seek healing for his slave is much more understandable, from a psychological perspective, if the slave was his beloved companion. For objective observers, the conclusion is inescapable: In this story Jesus healed a man’s male lover. When understood this way, the story takes on a whole new dimension.

In Matthew, in the course of expressing his faith in Jesus’ power to heal by simply speaking, the centurion says, “When I tell my slaves to do something, he does it.” When speaking here of his slaves, the centurion used the word ‘doulos’. But when speaking of the one he was asking Jesus to heal, he uses only ‘pais’. In fact, when he was quoted in Matthew, the centurion used ‘pais’ only when referring to the sick person. He used a different word, ‘doulos’, when speaking of his other slaves, as if to draw a distinction. (In Luke, it is others, not the centurion now, who called the sick one the ‘entimos doulos’). When ‘pais’ was used to describe a servant who was not an ordinary slave, it meant only one thing — a slave who was the master’s male lover.

In the Gospel, we have many examples of people seeking healing for themselves or for family members. But this story is the only example of someone seeking healing for a ‘slave’. And we shouldn’t forget that this was a proud Roman centurion (the conqueror/oppressor) who was humbling himself and pleading with a Jewish rabbi (the conquered/oppressed) to heal his slave. The extraordinary lengths to which this man went to seek healing for his slave is much more understandable, from a psychological perspective, if the slave was his beloved companion. For objective observers, the conclusion is inescapable: In this story Jesus healed a man’s male lover. When understood this way, the story takes on a whole new dimension.

Imagine how it may have happened. While stationed in Palestine, the centurion’s pais becomes ill — experiencing some type of life-threatening paralysis. The centurion will stop at nothing to save him. Perhaps a friend tells him of rumours of Jesus’ healing powers. Perhaps this friend also tells him Jesus is unusually open to foreigners, teaching his followers that they should love their enemies, even Roman soldiers. So the centurion decides to take a chance. Jesus was his only hope. As he made his way to Jesus, he probably worried about the possibility that Jesus, like other Jewish rabbis, would take a dim view of his homosexual relationship. Perhaps he even considered lying. He could simply use the word ‘doulos’. That would have been accurate, as far as it went. But the centurion probably figured if Jesus was powerful enough to heal his lover, he was also powerful enough to see through any half-truths.

So the centurion approaches Jesus and bows before him. “Rabbi, my …,” the word gets caught in his throat. This is it — the moment of truth. Either Jesus will turn away in disgust, or something wonderful will happen. So, the centurion clears his throat and speaks again. “Rabbi, my pais — yes, my pais lies at home sick unto death.” Then he pauses and waits for a second that must have seemed like an eternity. The crowd of good, God-fearing people surrounding Jesus probably became tense. This was like a homosexual man asking a pastor, prophet or a priest to heal his lover. What would Jesus do? Without hesitation, Jesus says, “Then I will come and heal him.” It’s that simple! Jesus didn’t say, “Are you kidding me? I’m not going to heal your pais so you can go on living in sin!” Nor did he say, “Well, it shouldn’t surprise you that your pais is sick; this is God’s judgment on your relationship.” Instead, Jesus’ words are simple, clear, and liberating for all who have worried about what God thinks of homosexual relationships. “I will come and heal him.” At this point, the centurion says there is no need for Jesus to travel to his home. He has faith that Jesus’ word is sufficient.

Jesus then turns to the good people standing around him — those who were already dumbfounded that he was willing to heal this man’s male lover. To them, Jesus says in verse 10 of Matthew’s account, “I have not found faith this great anywhere in Israel.” In other words, Jesus holds up this gay centurion as an example of the type of faith others should aspire to. Jesus didn’t just tolerate this gay centurion. He said he was an example of faith — someone we all should strive to be like. Then, just so the good, God-fearing people wouldn’t miss his point, Jesus speaks again in verse 11: “I tell you, many will come from the east and the west – i.e. beyond the borders of Israel – to find a seat in the kingdom of heaven, while the heirs- i.e., those considered likely to inherit heaven – will be thrown into outer darkness.”

By this statement Jesus affirmed that many others like this gay centurion — those who come from beyond the assumed boundaries of God’s grace — are going to be admitted into the kingdom of heaven. And he also warned that many who think themselves the most likely to be admitted will be left out. Now, to all homophobic Nigerian Christians, whose example would you rather follow?

Akanbi Albert Afeso is an author, researcher and NASRDA staff. He has three novels, a number of short stories and articles to his credit.

bible actually does not condemn homosexuality?