Nigerians take to the streets to protest LGBTI killings

A group of brave Nigerians took to the street yesterday to say enough is enough to the endless persecution and numerous unjust killings of LGBTI Nigerians. 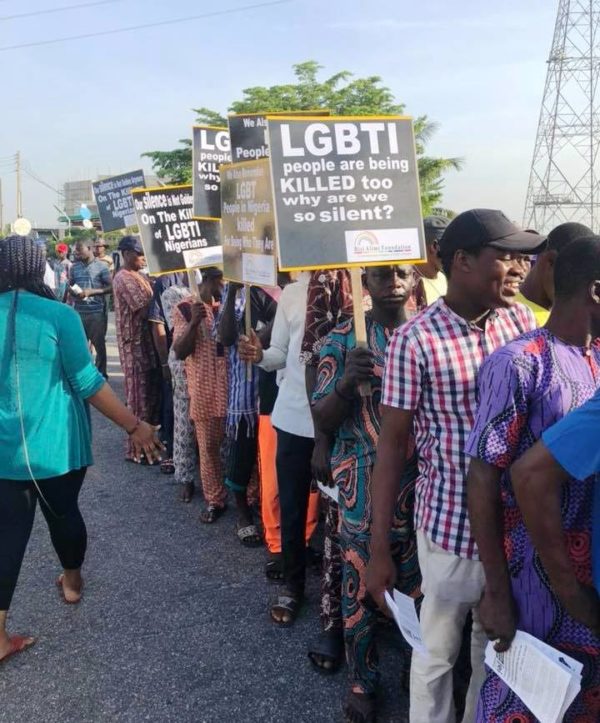 “LGBTI people are being killed too. Why are we so silent?” protesters in Lagos ask. (Photo courtesy of Bisi Alimi via Facebook)

The protest was launched in Lagos yesterday (May 28) in solidarity with a countrywide National Day of Mourning and Remembrance that civil society organizations held for many types of victims of violence in Nigeria. Those included many mass killings, the kidnapping of hundred of schoolgirls in Chibok in 2014, and violent clashes in northern Nigeria between farming communities and nomadic herdsmen.

The protest against anti-LGBTI violence was organized by a group of Nigerians working with the London-based Bisi Alimi Foundation, which one-time Nigerian TV personality Bisi Alimi established to work for justice for LGBT people after he was forced into exile for coming out as gay on Nigerian television in 2004.

The group marched with memorial placards for LGBTI Nigerians who have been killed in violent homophobic attacks and with messages declaring that enough is enough to jungle justice, discrimination and all forms of violence toward LGBTI Nigerians. Placards included these statements:

“Our Silence is Not Golden Anymore on the Killings of LGBTI Nigerians.”

“We also remember LGBT people in Nigeria killed for being who they are.”

“LGBTI people are being killed too. Why are we so silent?”

Every day, innocent Lesbian, Gay, Bisexual and Transgender [LGBT] Nigerians are targeted by homophobic people, and many have been killed in violent homophobic attacks, after which which the perpetrators often go unpunished. 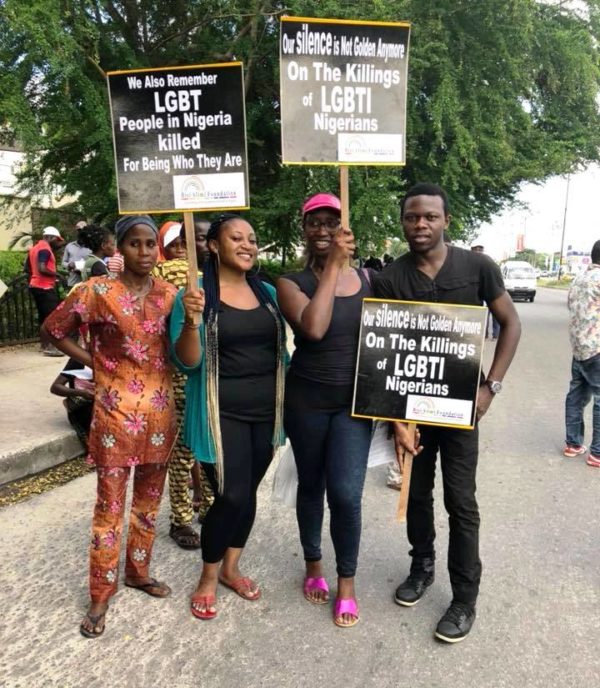 Protesters in Lagos seeking an end to killings of LGBTI Nigerians. (Photo courtesy of Bisi Alimi via Facebook)

“From Abia to Zamfara, Nigerians wake up daily to fresh news of mass atrocities which are barely acknowledged by government and a vast majority of fellow citizens. This is an anomaly that must end. “As a country, we seem to have normalised the violent killings of our own citizens and the pillage of our communities. Reports have reduced human lives lost to mere numbers that are bandied and argued about without thought of properly accounting for them, or according them dignity by naming them.”

In a piece which appeared on The Rustin Times website, Peter Okeugo, a media justice fellow of the Bisi Alimi Foundation, stated that even though the national event was not about homosexuality, still it was necessary to also remember LGBT persons who have lost their lives due to homophobic violent attacks and jungle justice. 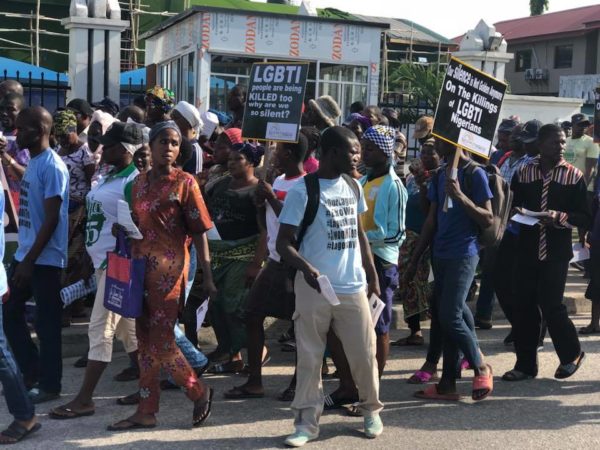 Protesters in Lagos seek an end to murders of LGBTI Nigerians. (Photo courtesy of Bisi Alimi via Facebook)

“While we mourn these people who have been killed through insurgence or conflict, may we not forget our brothers, sisters, fathers, nephews, nieces, uncles, aunts and children who were lesbian, gay, bisexual or transgender and have been killed for who they are.”