Nigerian writer kidnapped based on his perceived sexual orientation.

Chibuihe Obi a Nigerian writer and poet is currently being held in an unknown location by supposed kidnapper(s) whose requests are unclear. 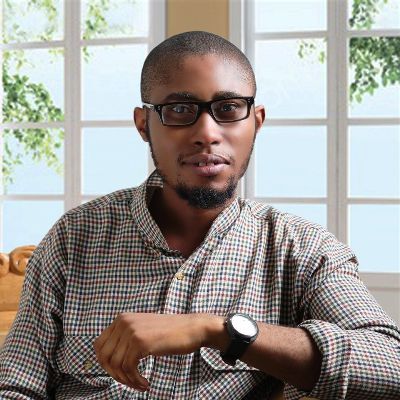 According to close pals of the victim, he was supposed to have appeared at the University of Nigeria for an event which was tagged ‘Poetry Friday’ where he was invited as a special guest alongside others.

Few hours after he did not show up and his cell phone switched off, his friends said that they started getting homophobic messages, particularly death threats from his Facebook account.

So far, the supposed kidnapper(s) are not clear about what they want, even though they have inconsistently demanded for money.

It appears that Mr. Obi is still in their custody, as they are still responding to messages via his Facebook page.

From the messages  and chats exchanged  between the supposed kidnapper(s) and some concerned persons who tried to reach him via his Facebook page, it appears that the kidnappers are pissed that he wrote about homosexuality in his essay that was published on BrittlePaper.com titled ‘We’re Queer, We’re Here’. 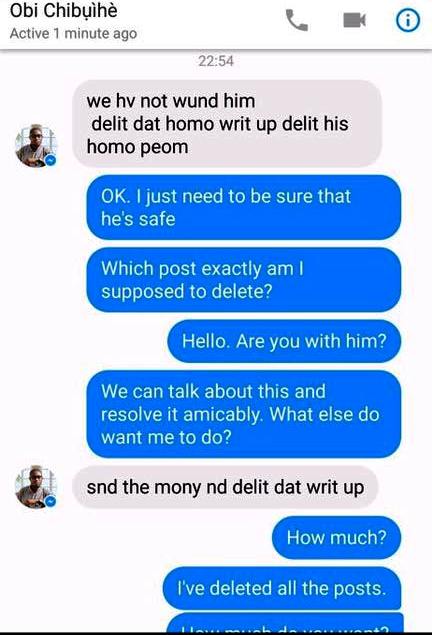 Screenshot of Facebook chat showing possible root cause of his kidnap

The following phone numbers 08183003203, 08180302222, have been made available for people who have any useful information concerning his whereabouts.

Kidnapping is a serious criminal offense and on no account should a person be subjected to its experience.

The anti same-sex marriage law, has given room and empowered many to hurt innocent Nigerians based on their real or perceived sexual orientation.

This is not a case about homosexuality, but a criminal case of kidnap, and thus, should be treated as such.

The life of a young man is clearly at stake here, and we urge all concerned to speak up and do something about this before it becomes a trend.

We hope that Mr. Obi will be released from the homophobic criminals that keeps him bound.