Nigerian LGBT rights activist Edafe Okporo has written a memoir about his experiences and struggles as a gay black man seeking asylum in the United States. 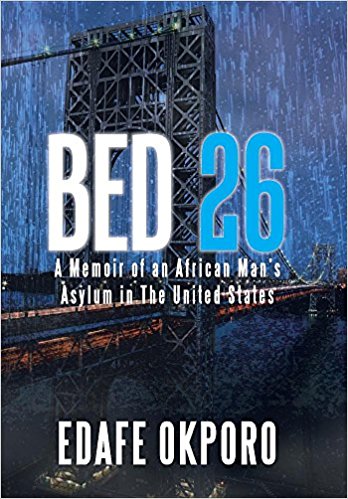 Gay men in Nigeria sometimes find it difficult and dangerous to live in the country because of the country’s homophobic stand on homosexuality.

Nigerian activists who are advocating for social inclusion and the recognition of the rights of LGBTIQ persons in the country have it worse. Often they end up with no choice but to leave to another country for their own safety in the face of persecution either because of their advocacy work or because of their real or perceived sexual orientation.

When activist Edafe Okporo faced persecution in Nigeria based on his sexual orientation, he decided that he needed to flee to the United States. There he endured further trauma. He was detained like a criminal, an experience that harmed his mental health, he says.

In his new book, “Bed26,” Okporo tells some of his experiences as a black gay immigrant fighting for survival and seeking freedom from constant persecution at his home country Nigeria.

The book includes contributions from other asylum-seekers, refugees, and other Nigerians who suffered the same fate as he did.

The title of the book comes from the number of the bed he was assigned in the detention center when he arrived the U.S., Okporo said in a podcast. He remained in that detention center for six months after which he was freed to leave.

The detention center, he said, packaged his “trauma as a bombshell, hijacking his image and identity.”

Overall, the book details the horrible experiences of LGBTIQ persons from West Africa who seek asylum in the U.S. with their individual stories of persecution.

The book is available from Amazon.