Nigeria, now the most homophobic country on Earth?

A new report delivered by the University of Melbourne Student Union (UMSU) on its official website has questioned Nigeria’s position on homophobia. 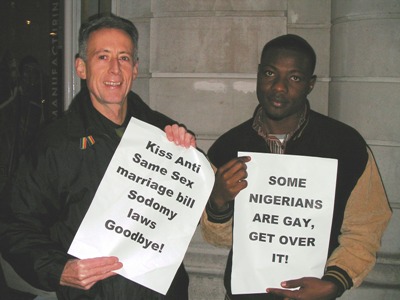 The texts (words) were penned by Hamish McKenzie and then Illustration was done by Mahalia Lodge.

Read the report below.

The global gay rights movement has just entered a dark new chapter with rising economic giant Nigeria snatching the limelight as Africa’s new poster child of homophobia. On 7 January, Nigerian President Goodluck Jonathan signed into law the Same-Sex Marriage Prohibition Act which not only criminalises gay marriage, but carries penalties of up to 14 years imprisonment for all organisations and individuals that support the LGBTI community, and open displays of homosexuality.

The fallout has been gut-churning: arrests, allegations of torture of homosexual men, death by stoning in some areas of the country, and one police unit declaring it was ‘on the hunt’ for homosexuals. And Nigeria, where homosexual sex and relationships have long been outlawed, is just one of 38 African countries that actively persecute LGBTI people. When defending the Nigerian law, a government spokesperson argued ‘this is a law that is in line with the people’s cultural and religious inclination… Nigerians are pleased with it’. He is not lying. One poll suggests that Nigeria is the most homophobic country on the planet, with 98% of the population opposed to homosexuality.

Proponents of homophobic laws in many parts of Africa, Nigeria included, defend their position by claiming that homosexuality is the latest in a series of Western cultural incursions that have served to disrupt and denigrate African cultural values since colonialism. In this antagonistic framing, homosexuality is posited as alien and incompatible with African culture. Moreover, in its current guise, homosexuality is framed as a reason for the plethora of social ills which plague many of these countries. President Mugabe in Zimbabwe has claimed that gays literally “destroy nations” and that they must be wiped out. This is the kind of logic at play. Homosexuals are imbued with the full threat of pernicious Western modernity.

It is widely acknowledged that these claims are a smokescreen for incompetence, scapegoating LGBTI people, and deflecting attention from inept governments. Nigerian commentator Udoka Okafor argues that “the Nigerian government seeks to ingratiate themselves to the Nigerian people and the only way to do that is to give them a common enemy, one they can condemn together”. As President Jonathan faces an uncertain election in 2015, this latest move is seen as a “distraction from their political, social and economic failing as a governing body”. We see a similar scapegoating of LGBTI people when they are accused of causing natural disasters like Hurricane Katrina or Black Saturday. This is not some exotic African quirk to be safeguarded. It’s very human, and it is very dangerous.

Moreover, the notion that these laws merely reflect an intrinsic African cultural preference and should therefore be respected is untenable. Most African countries, Nigeria included, inherited their anti-sodomy laws from their colonial occupiers. In the decades since decolonisation, the missionary work of the Western Christian right has unconscionably exploited this legalistic and cultural conservatism with the zealous propagation of an ultra-homophobic brand of Christianity in many parts of Africa. American evangelical Scott Lively has been one of the worst culprits, and is currently on trial for crimes against humanity for his support and indirect authorship of Uganda’s ‘Kill the Gays’ Bill. These homophobic revivals are the result of a confluence of factors, in which a corrupt government’s desire for political expediency dovetails with the agitation of Western religious extremists. This is no noble stand for the protection of African culture; this is cynical, Machiavellian realpolitik, meets religious bigotry.

The temptation is to respond with aggressive punishment in proportion to the crime. The UK has already threatened to withdraw aid to Nigeria, which would follow Germany’s similar move with Uganda last year. Gay rights activists across the world are seething, but to follow through on that rage could be catastrophic.

If we respond to these homophobic laws with punishment, derision and militant activism, then that very notion that homophobia is a Western conspiracy to infiltrate and denigrate Africa, which is clearly false, starts to seem legitimate. By reacting angrily, we risk transforming a chimerical delusion into a real threat, and the bizarre and demonstrably false justification for homophobic laws becomes at least superficially plausible. In doing so, we fuel the very flames we sought to quell, and do nothing for our LGBTI sisters and brothers who can least afford our moral indignation.

What then, can be done? The advancement of LGBTI rights in Nigeria can only take place within a broader human rights agenda. So long as there is poverty and social dysphoria, there will be a witch-hunt against the marginalised. LGBTI people are scapegoated because it is easy, not because it is right. The homophobia that is sweeping many parts of the world—Russia, Uganda, India—must be considered, taken seriously, and redirected towards the true perpetrators of human misery, be they dodgy governments, exploitative companies, corrupt NGOs, bigoted religious groups, or unpropitious socio-economic structures.

In this sense, we could take heart from what we see in Nigeria. People are willing to mobilise against agents of injustice. The task is to correctly identify those agents, and to unleash the human urge for self-improvement towards them, and away from the disgraceful crimes to which we instead bear witness.