Hausa local actor, Adam A Zango swears Quran to prove he is not gay 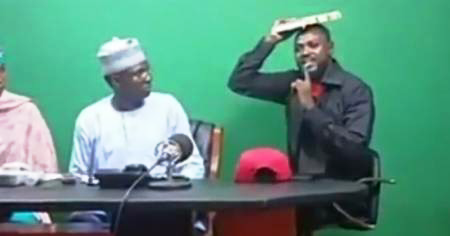 Adam A. Zango, a local movie actor in Kano, was seen on a live TV show, swearing with the Quran that he is not a homosexual.

Prior to the actor’s appearance on the TV show, rumors have been circulating that actors within the industry are homosexuals, and in a bid to come ‘clean’ he decided to swear, using his sacred religious book – the Quran, to prove that he is a heterosexual man.

He said: “I am here to tell the whole world that I am not gay and I do not participate in any gay activities within and outside the Kannywood industry”

But after his ‘coming clean’ stunt, it appeared that some of his fans were not happy with the tactics he applied, particularly with using the holy book to swear.

The actor showed neither regrets nor remorse; instead, he decided to post a ranting message on his Facebook wall, justifying his actions.

“I know that some of my fans are not happy about what I did with the holy Quran swearing. But I had to. Because when people are pointing accusing fingers at you, calling you all sorts of names….Why not prove the doubting Thomas wrong?..Prove yourself, clear your conscience. That is why I did it. Explanation gap can cause so many misunderstanding. Therefore if you are one among my fans, you will have to endure it. Because I’ll keep on proving myself to the end. I love you all”.

His actions does not prove anything, instead it further puts him under ‘the eyes’. His actions are totally unnecessary as there are lots of people even in high and respected religious positions in Nigeria who are homosexuals, and have come to know and accept their sexual orientation.

If Mr. Adam A. Zango is gay, then, it could be suggested that he embraces his true nature, as only then will he experience the inner peace that he seems to be seeking for.

Homosexuality is not a sin, neither is it bad or wrong to be gay. Homosexual men and women are not unhappy with their lives because they are gay; rather what they wish for is a society that will understand, hear and respect them.

Read also: Kenny Brandmuse says that being gay has NEVER been a sin

We consider the actor’s actions and attitude expressed, as homophobic. Actions like these are what drives most gay men and women to become suicidal, or depressed. So it is therefore to be condemned

Do you have something to say about this? Leave comments below.