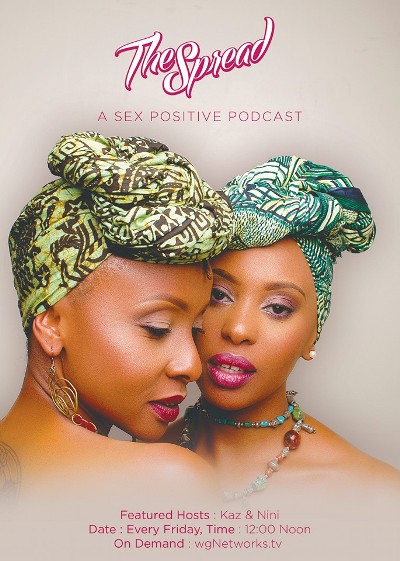 A video podcast speculated to have been scheduled to air on WGN TV Kenya, has been halted from airing by the Kenyan Film Classification Board for fear that it will promote lesbianism in the country.

News of the podcast made rounds on several websites and internet blogs, after it appeared on kentv.biz on 14th April, 2016 and its first debut was announced to go on air as from 15th April this year.

The podcast show was described on KENTV’ as ‘The First Lesbian TV show in Kenya to be hosted by two popular lesbian celebrities’ and was set to air every Friday.

The said podcast is titled ‘The Spread – A Sex positive podcast’ and is supposed to have been hosted by Kaz (Karen Lucas) who is a one time popular singer and Nini (Nini Wacera) who is an actress. 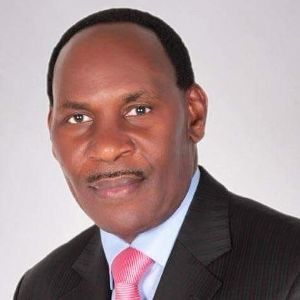 The podcast eventually attracted the attention of Ezekiel Mutua, CEO Kenyan Film Classification Board, who then issued a statement to WGN querying their involvement and threatening legal action.

Our attention has been drawn to a blog news highlight being shared online about an alleged ‘first lesbian TV show hosted by two popular lesbian celebrities’. ‘The Spread Podcast’ programme, reported on the http://kentv.biz website on 14th April, 2016 was allegedly scheduled to go on air as from 15th April this year on WGN TV.

While the Board is carrying out investigations to establish whether the programme was ever produced and whether the regulations guiding content production and distribution of film content meant for public exhibition were followed, the Board has established that the production was set to be distributed on WGNTV, a global video on demand service with a presence in Kenya’s cyber space.

If investigations reveal contraventions of established regulations, KFCB will take a firm action against the producers and distributors of the programme in line with the law.

The Board takes this opportunity to warn producers that it is against Section 4 of the Film and Stage Plays Act to engage in the production and distribution of film content meant for public exhibition/sale without obtaining a filming from the Kenya Film Classification Board.

Meanwhile, it is important to note that lesbianism is prohibited by the laws of Kenya. Article 45 of the Constitution defines marriage as a union between two people of the opposite sex.

Further section 162 to 165 of the Penal Code criminalizes homosexual behavior with a penalty of 5 to 14 years of imprisonment. Section 181 of the Code explicitly prohibits the distribution and exhibition of indecent content, attracting a penalty of a two-year prison term for offenders.

We take this opportunity to thank members of the public for bringing the matter to our attention. The Board will issue a comprehensive statement on the matter once investigations are complete.

WGN followed with a response in an official letter to the CEO, refuting the allegations, saying that the podcast was actually scheduled to be hosted on their network, but it was not a lesbian podcast, and has since been suspended. Details of the podcast has now been taken down from the network’s website.

See the response below. 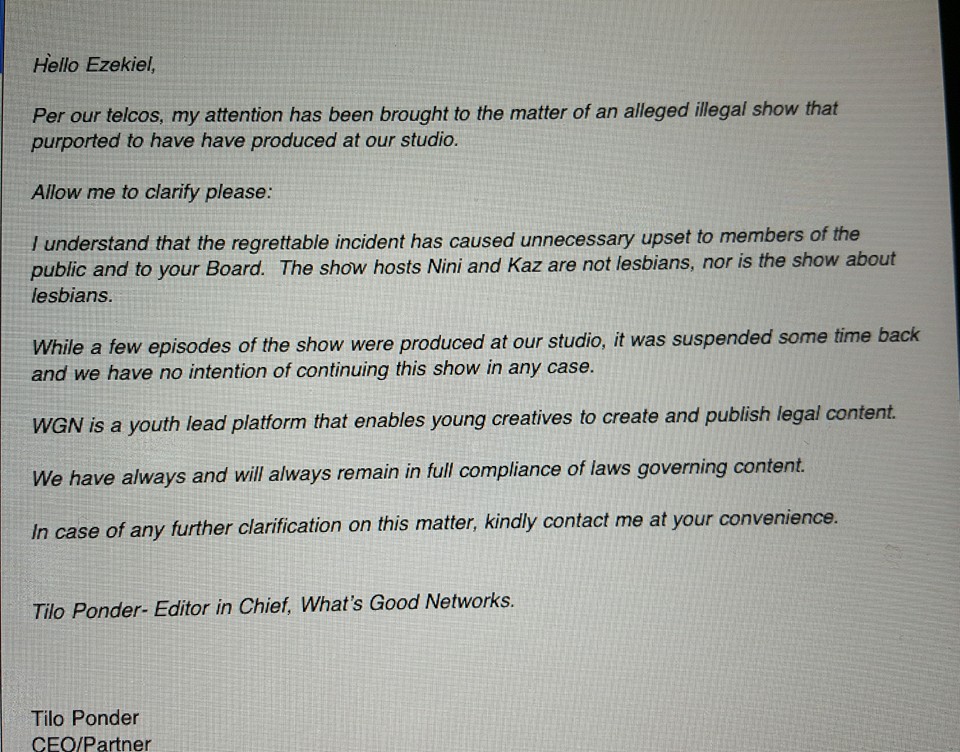 Kenyan constitution bans all forms of homosexual activities, claiming that same-sex acts between adults are unnatural.

This is clearly another classic case of homophobic oppression from the Kenyan government, using the different tools at its disposal to take away its citizen’s right to freedom of expression, when its so pleases.

We look forward to a future when all people will come to the understanding that homosexuality poses no risk to the society, and it is only natural for people to be gay.

Freemasons In Tennessee Vote To Support Ban On Gay Members

- March 7, 2016
TAGS BanKasKENTVKenyaKFCBLesbianLGBTNiniWGN TV
NEWER POSTAuthor is disappointed that his anti-gay book is not selling
OLDER POSTA Christian extremist who threatened to kill gay people has been arrested