An unnamed Nigerian cross-dresser was reportedly arrested and stripped naked by security officials at an undisclosed Night club in Abuja for putting on feminine-looking clothing. 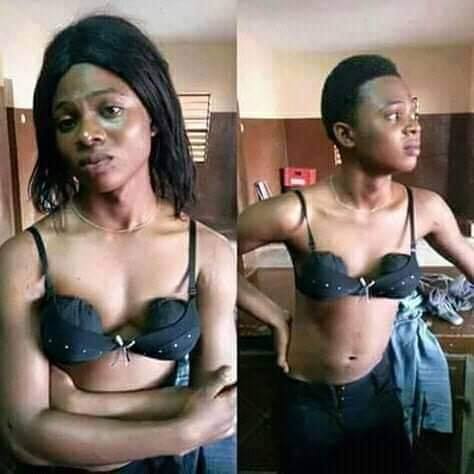 Photo of the unidentified young cross-dresser.

It was reported that the unidentified young man, frequents Night-Clubs in Abuja fully dressed in feminine-looking clothes.

But a few days ago, things went really bad for him at one of the club he had visited after he joined a group of men who under the impression that he is female, bought him food and drinks, but only for them to have been later informed that he wasn’t female by someone who knew him as male.

The security officials at the club were quickly alerted and he was then forcefully undressed and publicly humiliated to the amusement of everyone at the Night Club.

As that the time of writing this report, there is no information as to what followed after he was stripped naked, but surely, the experience isn’t one he is ever going to forget.

In other parts of Nigeria, identifying as transgender or a cross-dresser isn’t illegal, but yet still those who identify publicly as either, if discovered are mostly publicly humiliated, assaulted or even killed.

However, cross-dressing is illegal in the Northern region, with laws criminalizing the act with up to 1 year jail term.

Sadly, there is absolutely no legal protection whatsoever for persons who identify as trans or a cross-dresser in Nigeria leaving all such persons susceptible to violent attacks.