What I Learn’t From Being Outed As A Lesbian In Uganda! 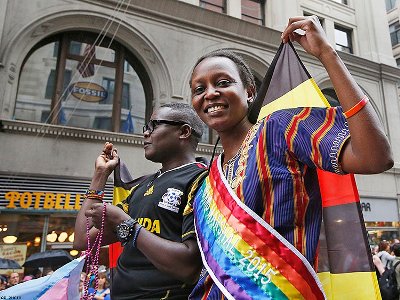 Five years ago in January, the High Court of Uganda made a landmark decision. It declared that lesbian, gay, bisexual, transgender, and intersex Ugandans have the same right to privacy as anyone else, and that newspapers cannot urge people to kill us.

Like our religious and political leaders, journalists are keepers of the public trust. But in Uganda, they have too often broken this trust to publish dangerous and unfounded rumors about LGBTI people.

Ugandan tabloids have been publishing articles about me since 2001. In 2005 the largest tabloid, Red Pepper, ran a front-page story with pictures of my house and friends, under the headline “Inside the Lesbian’s Den.” In 2007 the same paper published articles titled “We Name Guys and Babes Who Enjoy Bum Sex in Kampala,” “Schools Hit By Homo Scourge,” and “Homo Terror! We Name and Shame Top Gays in the City.” Many of these articles included graphic details about anal sex, often with illustrations. The articles also accused us of being “bum shafters,” child molesters, rapists, and sex addicts, and claimed that we are receiving money from abroad just for being gay.

But in 2010 we decided that enough was enough. Earlier that year, journalism students at Makerere University started a tabloid called Rolling Stone. In one of its first issues, editor in chief Giles Muhame published pictures, names, and addresses of alleged LGBTI Ugandans next to the caption “Hang Them.”

Muhame claimed to be starting a four-part series that would eventually expose 100 LGBTI individuals, and was not shy about his motive for the series.

“Threateningly, gays are after very young kids, who are easily brain washed towards bisexual orientation,” he wrote. He then urged the government to “take a bold step by hanging dozens of homosexuals.”

So we took him to court. Our case was straightforward: Rolling Stone called for us to be killed and told readers exactly where to find us.

In Kasha Jacqueline, Pepe Onziema and David Kato v. Rolling Stone, Judge Vincent Musoke found that LGBTI Ugandans are “members of the community who are regarded as worthy, in equal measure, of human dignity and who ought to be treated as worthy of dignity and respect.” The court acknowledged that LGBTI people have a right to live in peace.

Muhame’s defense was that LGBTI people have no rights. His lawyer tried to show a video clip from 2007, in which I said that I’m lesbian on national television. The judge didn’t buy it. Although having same-sex sex is illegal in Uganda under Section 145 of the Penal Code — punishable by life in prison — being lesbian is not a crime. “One has to commit an act prohibited under Section 145 in order to be regarded as a criminal,” the judge wrote.

When Judge Musoke read that judgment in court, I literally jumped for joy. It was a critical victory for the LGBTI community that bankrupted Muhame and led to the collapse of Rolling Stone.

But it was not the end of homophobia in the Ugandan press. Over the last five years, other newspapers, radio outlets, and television stations have repeatedly published pictures, names, and hateful rhetoric against real and alleged LGBTI people.

In February 2014, when President Yoweri Museveni signed the Anti-Homosexuality Act into law, Red Pepper unleashed hell on the gay community. “Exposed!” ran the headline. “Uganda’s 200 Top Homos Named.” Dozens of people were outed — many of them for the first time. With the tabloids and government cracking down on us, many of my friends had to leave the country, as attacks on members of our community increased tenfold.

I recently traveled to Nairobi to meet with 300 Ugandan LGBTI refugees who fled this wave of persecution. Nearly two years after the law was signed, hundreds of people are still stranded in Kenya without food, income, housing, or health care.

Other members of our community have continued to live in Uganda despite constant difficulties and discrimination.

In August 2014, we overturned the Anti-Homosexuality Act in court, but same-sex sex remains punishable by life in prison, and our lawmakers have threatened to introduce new legislation to criminalize the “promotion” of LGBTI rights.

Over time, we have come to realize that homophobia in the media is one of the primary obstacles to social change. For years, newspapers have published rumors and lies about us without telling our side of the story. We now realize that we need to show people our own perspective, in our own voices, because we can’t rely on others to do it for us.

In December 2014, a group of us started a website called Kuchu Times to do just that. Encompassing the entire LGBTI community, “kuchu” is the word we call ourselves in Uganda. Through print, radio, and television, Kuchu Times reports on issues that LGBTI Africans care about and shares stories from across the continent, with 1.5 million viewers around the world.

At the same time, we also created a magazine called Bombastic. With personal stories from more than 30 kuchus and allies, the magazine reveals how LGBTI Ugandans live their lives in the face of discrimination and homophobia. It also illuminates issues of parenting, health, religion, coming out, and gender and sex transitions. We have distributed 16,000 copies of Bombastic all over the country, from the capital of Kampala to 40 different districts. The second edition is set to come out after Uganda’s presidential election ends in March.

Since we began sharing more of our stories, Ugandan tabloids have published fewer articles about us. Rumors and lies still exist, but we now have platforms to change this narrative and tell the truth. By sharing our experiences, we hope that more people will see us as human beings worthy of empathy and respect. There is still much work to be done in Uganda and around the world, but we now have greater visibility and more people coming out. As we continue raising our voices, we are slowly but steadily changing hearts and minds.