Shocking: Two Male Lions Fall In Love With Each other! 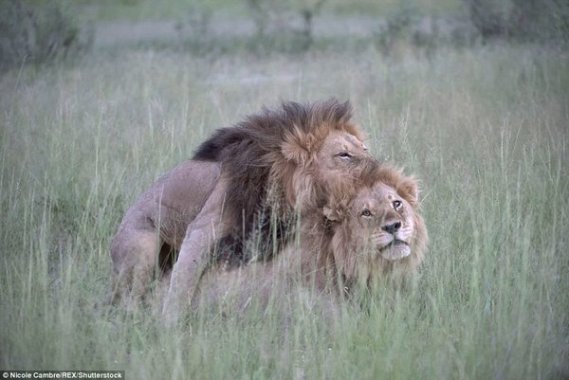 Two male lions were discovered and photographed ‘mating’ in a safari park in Botswana, after ignoring a pregnant lioness.

Cambre’s images are mainly documentary falling within the category of travel, street, and wildlife.

Cambre who was a first place winner of Wildlife Discovery of the Year in 2014, in the Monochrome Awards 2014 International Black & White Photography Contest, said of the photographs.

“These males had pushed out the resident males earlier in the year and the other female lions had headed into the Mopani woodlands; an area difficult to access with a safari vehicle”

‘It is the first time I have seen homosexual behavior in lions, but when reading about it upon my return, it is not that uncommon. With the light just around sunset, it gave some spectacular images”

This will further prove that if animals can express same gender loving behaviors, and find a way to express their emotions toward each other in a loving way, then clearly nothing stops two same gender human adults with full knowledge of how they truly feel about each other from engaging in an act of love.

If homosexuality can be found in animals, then clearly it is present in other forms of nature, and this breaks forth beyond all tainted arguments that homosexuality is unnatural.

What do you think about this article? please leave your comments in the comment section below.