New Nigerian movie all set to change narrative about homosexuality

Out of a highly homophobic country, emerges another venturesome LGBT-themed movie.

Official Movie title as shown in the film. Courtesy Youtube.

The movie which is titled “Everything In Between” daringly brings to screen and humanizes issues relating to homosexuality. 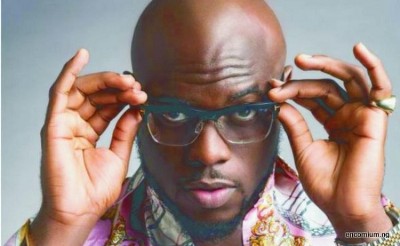 With it’s line up of interesting casts, includes the Nigerian controversial celebrity TV Personality Denrele Edun and a host of many others. 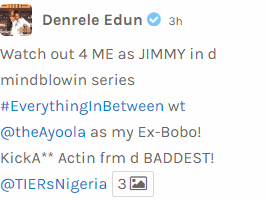 Denrele who played a gay character in the movie, excitedly tweeted about his role tagging along famous Nigerian singer and 2012 winner of MTN project fame Ayobami Ayoola who played the role of his ex-lover.

TIERs (The Initiative for Equal Rights) teamed up with Nollywood actress and producer Ashionye Michelle Raccah to produce the movie. 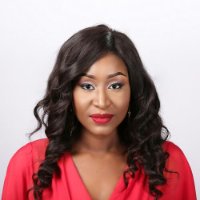 This is not the first time that TIERs a human rights organization in Nigeria will be bringing something unique and LGBT inclusive to our screens. It could be recalled that earlier this year, two films ‘Hell or High Waters‘ and ‘Veil of Silence‘ were both produced and released respectively.

The movie tells the stories of “three young professionals; Emma Okoye, Dayna Elliot and Demola Ogunjimi and their struggles to conform to what is considered the norm in the Nigerian society. Emma, Dayna and Demola face similar challenges and are judged by family and society based on who they are and who they love. Everything In Between explores issues of sacrifice, love, sexuality, pressure on women to get married and the need to either live your life or conform to society’s expectation”

The movie hopefully will change the usual one sided negative narrative about homosexuality which has become a norm with Nollywood and the country as a whole, Nigeria.

The trailer of the movie has been made available on TIERs’s official Youtube channel and can be viewed from there or below.

- January 31, 2021
TAGS Do you have anything to say? Leave your comments below.FILMHOMOSEXUALITYLGBTNIGERIAYoutube
NEWER POSTNigerian NGO set to publish the stories of older gay/queer men in Nigeria
OLDER POSTNigerian man under threats to come out publicly as gay to a church