NoStrings Discusses The Film Magda’s Lesbian Love With The Cast! 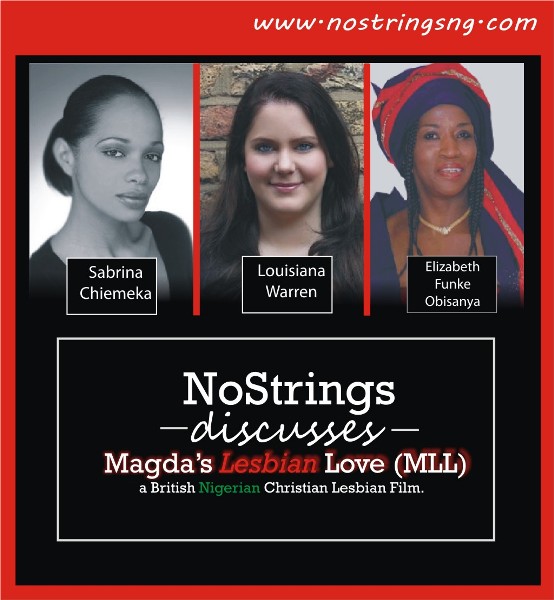 Elizabeth Funke Obisanya is credited as both producer and executive producer and writer of the film, while Will Moore takes credit as Director of Cinematography.

The film tells the story of Magda and her childhood friend Katarina who embarks on a lesbian relationship whilst at boarding school in England in the 80’s.

The film also deals with female homosexuality, and also deals with black racism, homophobia and bullying in the UK. The film has also featured in different international festivals.

Recently the film won an award for ‘Best Short’ at BEFFTA (Black Entertainment Film Fashion Television and Arts) on Oct. 30.

Elizabeth said of the Award “We are very honored to have this award, because we have been taking this film around festivals and it has not been well received by black festivals here in the UK and even abroad because most of the black festivals seem to be homophobic”

On the podcast, Elizabeth Funke Obisanya describes her challenges with creating a Christian lesbian film and dealing with negative criticisms and rejection from both Christian fundamentalist whom she said felt that the film encouraged homosexuality and what she describes as a ‘silent rejection’ from Nollywood UK.

She said “I applied several times to be an LGBTIQ film maker because off course that is who I am, but they have refused to approve my membership, it is not like I do not qualify, I have my masters in film making, so it’s just the LGBTIQ issue”

She further explained “most of the Christian festivals here that I submitted the film to, requested that I end the film with Madgda the lesbian, repenting, but I told them that, that isn’t the story here, and that Jesus had paid the penalty price for the LGBTIQ person to be gay and be a Christian”

NoStrings also had Lousina Warren on the show, Lousiana who played the homophobic racist bully, and when asked about what she expects people to take from the film, she said, “I want people to always act with their heart, and do whatever makes them happy”

NoStrings on the podcast show, also had a brief discussion with Sabrina Chiemeka, a British Nigerian and a fast rising actress in the UK, and when asked on the show about how she felt featuring in a what was to become a controversial lesbian film, giving that the general Nigerian society frowns at the subject of homosexuality, she said “I did not feel any particular way doing a lesbian film, rather I thought It would be a fun thing to do”

The film is available for purchase online. To see the trailer click HERE.

To enjoy the actual live interview please use the download link above.